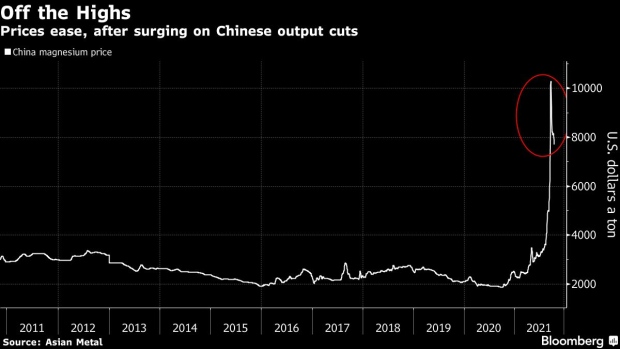 (Bloomberg) -- Magnesium buyers hit hard by a shortage of the critical material for hardening aluminum used in cars have some good news -- there are signs the supply crisis in top producer China is easing.

Prices recently hit a record as Chinese exports slid after an energy crunch cut output of magnesium used in everything from laptops to power tools. That sparked warnings about knock-on issues for aluminum used in the struggling auto sector, and industry groups in Europe said they’ll run out of supply by late November, threatening thousands of businesses and millions of jobs.

Those worried users may be about to get some relief. Key magnesium producers in China’s Shaanxi province have been gradually restoring output since the start of October and are now running at about 70% to 80% of capacity, researcher Shanghai Metals Market said. Prices have also fallen from their peak.

“With producers ramping up, magnesium tightness is easing,” said Liu Hao, an analyst at SMM. Prices are retreating “by squeezing out the premium caused by previous panic sentiment.”

Shaanxi accounts for more than 60% of the country’s total output. Electricity curbs and the government’s push to reduce pollution had affected magnesium production in the province since the summer, before output was completely halted there in September, Liu said.

Magnesium buyers have been left exposed by the slide in China’s exports, especially in Europe, a region that gets almost all its supplies from the Asian country. A group of industry associations on Friday said the crunch could shutter operations within weeks unless reserves are replenished. There have also been stark warnings in the U.S.

The crunch is one of the latest troubles for industrial users that have suffered from spiking energy costs, higher prices of materials such as copper, snarled supply chains, as well as a global chip shortage hurting car production.

Aluminum producer Norsk Hydro ASA on Tuesday said local teams in China are working with magnesium suppliers to secure volumes for next year, and that there are limited alternatives to supplies as China dominates production.