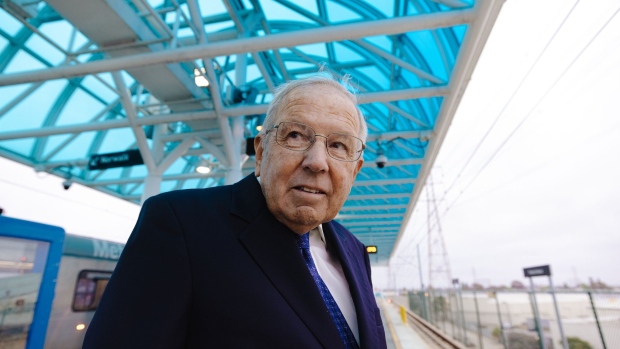 (Bloomberg) -- From his rented one-bedroom apartment in Los Angeles’s Redondo Beach, a couple of blocks from a discount shop and a thrift store, John Chevedden is polishing a speech he’ll give to Alphabet Inc.'s executives and shareholders at its annual meeting next week.

The former aerospace employee is pressing the $1.4 trillion tech giant to address the hot-button issue of disinformation. Getting other shareholders to back Chevedden’s call, still a fledgling topic for most investors, may be a long shot. But for Main Street's most prolific corporate agitator, it's part of a new front he’s battling companies on — their impact on society.

Chevedden, more of a governance warrior than a social activist, has spent almost three decades pressuring the biggest US companies from General Motors Co. to eBay Inc. and JPMorgan Chase & Co. on how they’re run. Wealthier investors such as Carl Icahn — and more recently Elon Musk — spend billions of dollars buying stakes in businesses in order to instigate corporate change. Instead, Chevedden owns just a tiny fraction of a corporation's stock and then every year, he churns out a hundred or so shareholder proposals, pressuring boardrooms and C-suites on everything from the minutiae of voting bylaws to bigger issues such as executive bonuses. Shareholders then determine the fate of those official requests when they vote at annual meetings.

Chevedden is part of a cohort of small activist shareholders who’ve been taking aim at corporations long before retail investors caused last year’s meme stocks frenzy. By owning $2,000 worth of a company's shares for at least three years, they write 500-word proposals and get them placed on ballots to be voted on at annual shareholder elections. Thousands of those meetings are currently underway across the country, the bulk of them beginning in April and running through mid-June.

Critics have mocked Chevedden and others like him, anointing them with the impolite name of corporate gadflies. But there’s motivation in their derision: Corporations have over the years collectively spent millions of dollars on lawyers to fight Chevedden's relentless stream of proposals from landing on their ballots, sometimes even suing him.

“If I'm a nuisance, I'm one with purpose,’’ the laconic 76-year-old said, listing stock tickers of companies from Netflix Inc. to Texas Instruments Inc. where his proposals have won.

Now, after decades focusing on the unglamorous world of corporate governance — the “G” in environmental, social and governance investing — Chevedden is trying to capitalize on the latest zeitgeist: the “S.” Historically the domain of larger investors including public pension funds and religious investors, social proposals attracted unprecedented support during last year’s shareholder meetings as big money managers such as BlackRock Inc. threw their heft behind requests focused on climate change and racial disparities. Tiny investor Engine No. 1 scored a stunning victory over Exxon Mobil Corp. last year by landing new directors on its board to help it shift towards clean energy, while in recent months, billionaire Icahn has been pressuring McDonald’s Corp. and Kroger Co. on animal welfare.

Since social issues are increasingly getting in the eyes of investors, Chevedden said of his new mantle, “it’s best to go where the votes are.”

The first shareholder proposal Chevedden ever filed was personal. In 1994, after being laid off from his job as an administrator at Hughes Aircraft Co., he submitted a proposal to Hughes’s owner, General Motors, on its employment practices related to layoffs. He studied books on shareholder activism and spoke to corporate governance experts.Chevedden’s GM proposal lost. But he was hooked by the combined thrill of fighting for the little-guy investor and holding powerful executives to account. Over the following decades, he turned this new hobby into an unpaid profession, submitting more than a thousand shareholder proposals while living off his savings and stock market investments. “I don’t live a lavish lifestyle,’’ said Chevedden, who owns about 200 stocks collectively worth more than $1 million, and drives a Honda Accord.

Shareholder activism was pioneered by New York brothers Lewis and John Gilbert, who in the 1930s started pressing corporate executives on governance issues. Their work inspired other small investors including the late Evelyn Davis, who for more than 50 years pressured companies and berated chief executives, often appearing in costume at annual meetings.

Small shareholder activists have succeeded in getting companies to enact rules ranging from requiring directors to retain company stock for a certain period of time to having an independent board chair. Occasionally they pair up to file proposals and attend company meetings on each other’s behalf. (Chevedden sometimes partners with a group of three other shareholder activists, who by comparison file only a few dozen proposals each year.) Despite their size, they’ve had outsize influence on corporate America, accounting for about a third of the 2,500 or so proposals that landed on ballots since the start of 2017, according to data compiled by Bloomberg Intelligence.

Companies fight to keep proposals off ballots by either trying to convince filers to withdraw them, or asking regulators to quash them. Failing that, executives will urge shareholders to vote against the proposals. While corporations aren’t legally required to follow through on winning proposals, many still do, and do take note when resolutions get more than a quarter of votes.

Chevedden’s proposals have gotten an average of 39% shareholder backing over the past five years, data from Bloomberg Intelligence show. While many of his proposals don’t win, those that do — sometimes with overwhelming investor support — have catalyzed change in the boardroom. His winning requests include getting all Netflix board directors to subject themselves to annual re-election, requiring FedEx Corp.’s board to get approval from shareholders on some severance or termination payments in executive pay packages, and at Goodyear Tire & Rubber Co., removing a requirement for a two-third majority vote for shareholder proposals, according to Bloomberg Intelligence.

The downside of so many governance-oriented proposals getting adopted by companies is that “finding new issues that garner consensus among large shareholders may become more difficult,’’ said Yaron Nili, a law professor at the University of Wisconsin-Madison who wrote a paper on small activist investors. Which is why, as investors flock to ESG — even as it comes under mounting criticism from insiders and Republicans alike — Chevedden has discovered a whole new battleground.

Read more: Charlie Penner, the Investor Reshaping Exxon From the Inside

Chevedden’s initial way in was politics. Four years ago, he started calling on companies, including Fedex and Ford Motor Co., to disclose details of their political contributions and lobbying. “We don't want companies supporting political candidates or pet projects of the CEO,’’ he said. Since then, more than a third of the 16 proposals Chevedden has filed on lobbying and political spending have won. This year, he has five requests on the ballot.

Next in his path is disinformation. Not only has it fueled hate speech and violence during the pandemic, it’s also created gridlock in government, preventing laws and regulations from being passed, Chevedden said. “Misinformation results in general chaos,’’ he said.

Google parent Alphabet is now in his crosshairs. His proposal is asking the tech giant to report the risks of disinformation — which he says it profits from — and how those risks impact society and the economy at large. A report “will help shareholders understand where the company’s prioritization of profits before people creates a financial risk to their portfolios,’’ Chevedden said in the proposal, which he wrote in partnership with a non-profit called Shareholder Commons. (Another shareholder is asking Alphabet to commission an independent report on how it manages misinformation on its platforms. Meta Platforms Inc., formerly Facebook Inc., is facing a similar proposal from another investor.)In response, Alphabet asked regulators, unsuccessfully, to thwart Chevedden's proposal from reaching the ballot, and is now recommending that shareholders vote against it at its June 1 meeting. The company also has said addressing misinformation is a top priority, and that it’s doing everything from employing intelligence and security experts to blocking millions of pages and videos that violate policies. “We remain committed to fighting disinformation,” Alphabet said in its proxy statement.  The company has been unscathed by Chevedden’s previous governance-related proposals over the years. (Two misinformation-related proposals filed by other investors with Alphabet in 2018 and 2019 failed to get more than 13% of votes, according to Bloomberg Intelligence data.)

Two prominent firms that give recommendations to shareholders  — Glass Lewis & Co. and Institutional Shareholder Services — are suggesting investors vote against Chevedden’s proposal at Alphabet. “Although we have a number of concerns regarding the company’s practices and disclosures, we aren’t of the view that adoption of this proposal would necessarily ameliorate these concerns,’’ Glass Lewis said in a report.

Chevedden’s proposal will be one of 21 that will be voted on at Alphabet’s annual meeting. A spokeswoman for the company, based in Mountain View, California, referred to its proxy statement.

Activists like Chevedden view each proposal less as a now-or-never moment, but the beginning of a longer awareness campaign to bring issues into the mainstream with other investors. So even if his Alphabet proposal doesn’t pass — the probable outcome — the septuagenarian is hardly deterred.

“It's a feeling of being competent,’’ Chevedden said of his life’s work, noting that he relishes getting his proposals on ballots after corporations and their lawyers fight so hard to quash them. “Where else can someone that’s never gone to law school beat a $2 billion law firm?’’