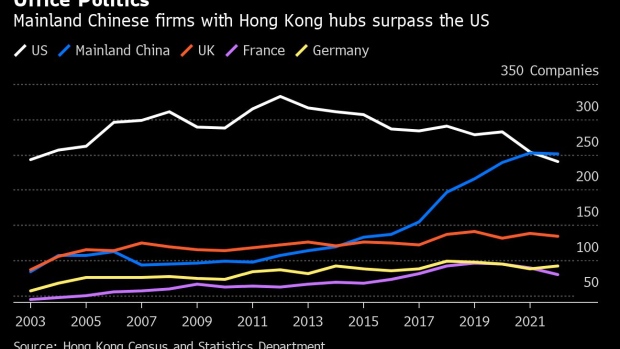 View of buildings from Victoria Peak in Hong Kong, China, on Thursday, Jan. 27, 2022. Hong Kong’s economic performance in the fourth quarter may provide little consolation as the city struggles to bring the omicron wave under control, putting pressure on the government to dole out more stimulus for hard-hit sectors like retail. , Bloomberg

(Bloomberg) -- The number of American companies with regional headquarters in Hong Kong has dropped below mainland Chinese firms for the first time in at least 31 years.

There were 240 US companies with regional hubs in the city as of June 1, down 14 from the previous year and the lowest number since 2002, according to data released by the Census and Statistics Department dating back to 1991. Mainland Chinese firms with regional headquarters in Hong Kong fell by one to 251, the data show.

Strict Covid curbs, a national security campaign and the struggling economy have dented Hong Kong’s appeal as an international finance center, with businesses shifting resources to other centers such as Singapore. While Hong Kong has removed its most onerous pandemic measures, such as hotel quarantine, visitors are still subject to a series of restrictions, and the border with mainland China remains closed.

Chief Executive John Lee acknowledged in his policy address last month that the city had lost 140,000 workers over the past two years, and made attracting overseas talent one of his top priorities.

It will be an uphill climb. The number of visas granted to overseas workers in Hong Kong fell by about two-thirds during the Covid-19 pandemic. Travel has yet to pick up. Cathay Pacific Airways Ltd., Hong Kong’s flag carrier, flew just 16% of pre-pandemic passenger capacity in September, while Singapore Airlines Ltd. was back to about 73% of 2019 levels, similar to other major global operators like British Airways Plc and Deutsche Lufthansa AG.

Mainland Chinese firms accounted for 18% of the city’s regional headquarters, compared to 17% by American companies, the data showed. Japanese, UK and German companies were the next biggest by number. At the peak in 2012, there were 333 US firms with hubs in the city.