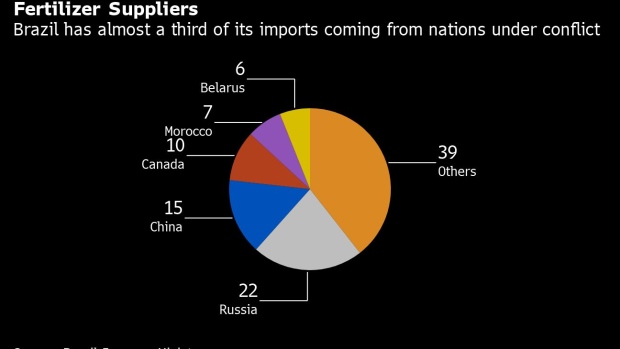 Soybeans are harvested on a farm near Brasilia, Brazil, on Friday, March 4, 2022. Brazilian farmers are having trouble getting fertilizer for the next soybean crop after top-supplier Russia's invasion of Ukraine, a blow to producers already dealing with surging costs. , Bloomberg

(Bloomberg) -- One of Brazil’s largest farmers is planning to reduce fertilizer use by a quarter next season, relying on more precise applications and soil testing to maintain crop yields.

SLC Agricola SA, which cultivates an area bigger than Delaware with soybeans, corn and cotton, will probably use between 20% and 25% less fertilizer in 2022-2023 without jeopardizing yields, according to Chief Executive Officer Aurelio Pavinato. The decision on whether and where cut applications will be based on soil testing and precision agriculture, tools already adopted by the firm for several years.

SLC’s plan offers a glimpse of how growers in the agriculture superpower are preparing to deal with a global shortage of crop nutrients in the wake of Russia’s invasion of Ukraine that has caused prices to skyrocket, threatening to reduce production of staple crops exported around the world. The prospect of lower yields has increased concern that crop prices will hit fresh records, adding to pressure on food supply to developing countries.

“It’s possible to cut fertilizers in a year and have a null impact on production,” Pavinato said in an interview. Fertilizer reserves in the soil from previous seasons will ease the impact of applying less, he said.

The majority of farmers will probably adopt the same strategy, and lower demand will lead the market to balance again, he said. Of the three key nutrients for crops, SLC has secured 83% of the potassium it’s planning to apply next season and half of phosphorus, but hasn’t yet bought nitrogen.

In the Cerrado, where the main grain belt is located, a lack of nutrients in soil makes farmers more dependent on fertilizer, according to Flavio Bonini, a manager of technical services for Mosaic Co. in Brazil.

On the farms owned by Sementes Falcao, a farming and seed company based in Passo Fundo, Rio Grande do Sul state, one of the areas with the richest soil in Brazil, tests on cutting fertilizer were successful. The company spent five seasons using only nutrient reserves in the soil, according to its President Humberto Falcao.

“Production may have declined a little, but the profitability was kept,” he said. “Brazil could spent a year with no fertilizers, which could reduce costs and its dependency on imports. But of course it needs soil analysis.”