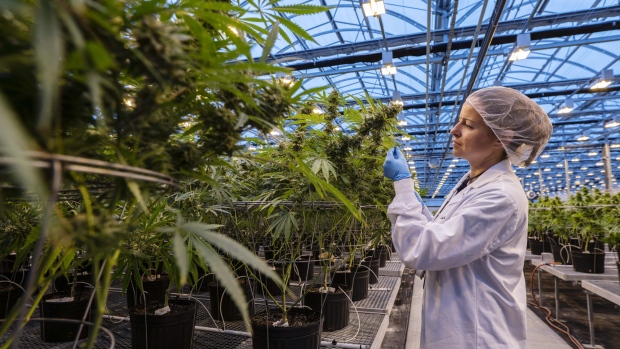 A worker inspects cannabis plants growing in a greenhouse at the Hexo Corp. facility in Gatineau, Quebec, Canada, on Thursday, Oct. 11, 2018. Canada's drive to legalize marijuana kicks off early Wednesday with store openings on the Atlantic Coast, giving the country a massive head start in developing a global pot market that some analysts peg at $150 billion. , Bloomberg

Canadian governments should allow medical marijuana to be sold in pharmacies, according to a newly formed group of pot producers, drug companies, pharmacists and retailers.

Dubbed the Common Initiative, the group is urging changes to Canada’s medical marijuana regulations, which only allow for distribution of the drug via mail. It’s also pushing for tax on medical pot to be dropped so it’s treated the same as other medicines.

The move to allow easier access would reduce the risk of patients self-medicating through the recreational market, the group argues. It may also help boost sales.

“The pharmacist is the best health-care professional and has your entire medical profile,” said Michel Robidoux, president and general manager of Sandoz Canada, a division of Swiss pharmaceutical giant Novartis AG. “If you use medical cannabis under a doctor’s recommendation, there should be visibility by your pharmacist.”

Sandoz has an agreement to develop medical cannabis with Tilray Inc., one of the largest pot companies by market value.

The federal government “is open to discussing other models of distributing cannabis for medical purposes, including pharmacy distribution,” Thierry Belair, press secretary for federal Health Minister Ginette Petitpas Taylor, said in an email. Provincial governments would also have to be on board.

Medical marijuana has been legal in Canada since 1999 but the only way to access pot was through the federal government’s supply or by growing at home. This changed in 2013 when the government allowed for the creation of commercial growers and distributors, setting the stage for today’s robust industry of licensed cannabis producers. There are currently more than 300,000 registered medical marijuana patients in Canada.

Pharmacists can provide advice on drug-to-drug interaction, side effects and dosing requirements that isn’t available through the recreational market, Tilray Chief Executive Officer Brendan Kennedy said in an email.

There was a perception some people were using the medical market to access legal pot for recreational use, but it’s increasingly accepted that most patients are using it for legitimate purposes, said Deepak Anand, vice president of business development and government relations at consulting firm Cannabis Compliance Inc.

“More and more data is showing these are not 18-year-olds that are buying this product to get stoned, there are actually a lot of people that are using this truly as medicine,” Anand said. “It makes a lot of sense for pharmacies to be the ones dispensing this.”