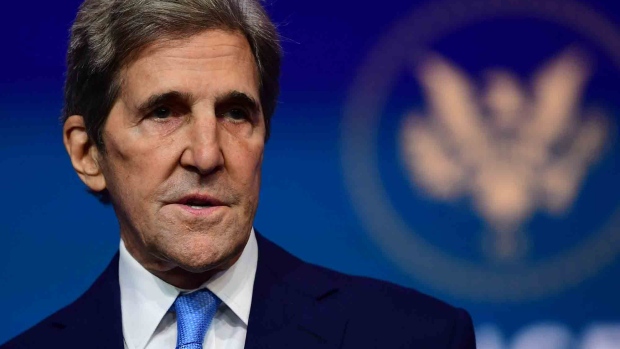 John Kerry’s appointment this week as the U.S.’s first climate czar was also the first time climate was given an official spot on the National Security Council.The move was symbolic, to some extent, expressing a desire by the Biden administration to treat the “climate crisis as the urgent national security threat that it is,” as Kerry tweeted. Progressive environmentalists are urging President-elect Joe Biden to go even further and declare the issue a national emergency—the same tactic outgoing President Donald Trump used to fund part of his border wall.

Climate activists eager for a stronger stance toward global warming should be careful about how they adopt the language and thinking of national security wonks.

A few years ago, addressing climate change was largely focused on how we produce our energy. It’s now widely acknowledged that the changing climate, and our efforts to arrest it, will affect most facets of human life. It's seeped into all aspects of technocratic policymaking, from cutting transport emissions to helping fossil fuel workers find new careers. Both are addressed in Biden’s climate platform.

Climate change has long been described a “threat multiplier.” The phase was used in 2007 by retired high-ranking U.S. officials in a report for CNA, a federally funded security think tank, to connect climate to national security— possibly the first time the two issues were linked. The first UN Security Council session exploring the connection was held that same year.

Kerry’s own World War Zero emissions-reduction initiative, launched in 2019, is heavy with militaristic imagery. It exhorts supporters to “enlist, engage and mobilize” in the fight against climate change. The idea, he explained in an interview with Emily Atkin at HEATED last year, was to bring people across the political spectrum together under a very broad umbrella of concern about climate change. It was a group with different opinions, he said, “but we shouldn't get lost in that debate before we get the kinds of people in Congress and elsewhere who aren’t deniers.”

It’s inevitable, and necessary, that the security community considers climate change when making decisions. After all, their job is to think long term and strategically about issues like shipping routes and resource scarcity. It’s not clear if the reverse is also true: Is framing climate change as a security issue a useful way to stop the planet from warming?

That way of thinking carries the risk of brushing aside the human casualties of climate change. As environments get unbearably harsher, people will try to move both domestically and across borders to escape heat, drought, rising sea-levels and their resulting conflicts.

It’s happening at the same time that attitudes of many wealthy countries towards asylum seekers have hardened. In a 2019 paper, Kimberley Anh Thomas and Benjamin P. Warner chronicle multiple examples where people who are suffering from some of the worst effects of climate change are perversely cast as threats because of their vulnerability. Australia, which welcomed waves of “boat people” fleeing Vietnam in the 1970s and 1980s, has since the early 2000s deployed interception at sea, surveillance and offshore refugee processing to keep people out.

While there are many factors driving this change, “much of it can be attributed to the dominant securitization discourse that has eroded an international system of climate refugee protection,” the authors wrote. It's a dangerous subtext rather than an explicit call to arms.

Kerry’s own comments about his appointment emphasized the importance of multilateralism – “we all rise together or we all fall together” – and he has proven to be an effective climate diplomat, helping ensure the passage of the Paris Agreement. Many experts who work at the intersection of climate and security stress international cooperation in cutting emissions. They caution against the dangers of geo-engineering, which they worry might be used to change weather patterns to benefit some countries at the expense of others, or to shirk responsibilities to reduce greenhouse gases.

But in their book The Secure and the Dispossessed, green campaigners Ben Hayes and Nick Buxton ask, “who are the winners and losers of the new ‘climate security’ strategies – or, put another way, what is being secured, for whom, from whom, and at what cost?” The bipartisan appeal of viewing climate change as a security challenge shouldn’t distract from that question, or we risk building a future that’s militarized as much as it is decarbonized.