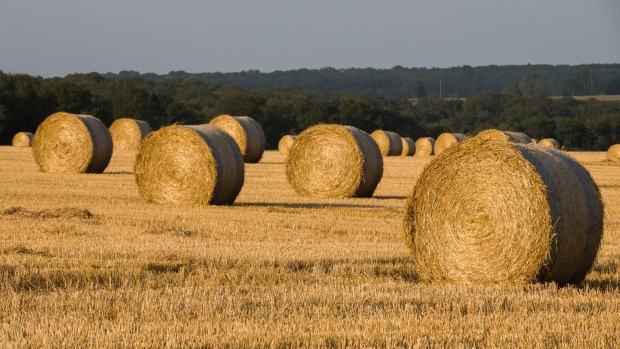 Bales of straw during a wheat harvest in Lierville, France, on Thursday, Aug. 12, 2021. Harvests have been delayed by heavy rain, with swathes of France and Germany seeing double or more of the normal rainfall in the past 30 days. Photographer: Nathan Laine/Bloomberg , Bloomberg

(Bloomberg) -- Turning bales of straw into ethanol is about to become a highly profitable venture in Europe, according to a firm that just opened a production site in the continent.

Clariant AG, a Swiss chemicals maker, just opened a facility in Romania to make so-called advanced biofuels, which use agricultural waste or non-edible crops to make fuels that can be blended into gasoline and diesel. That’s environmentally better than so-called first-generation ethanol currently on the market, which is made from foodstuffs like sugar or corn.

“We expect double the price to first generation,” he said. That’s “simply because it’s legislated,” he said.

Clariant built the plant mainly to promote its technology, which it now wants to license to other companies.

The European Union has set a target that at least 0.2% of all transport fuels should be made from advanced biofuels next year, rising to 2.2% in 2030.

Clariant’s technology could also be used in chemicals and aviation. “This is a prime example of a circular economy solution,” Keijzer said.