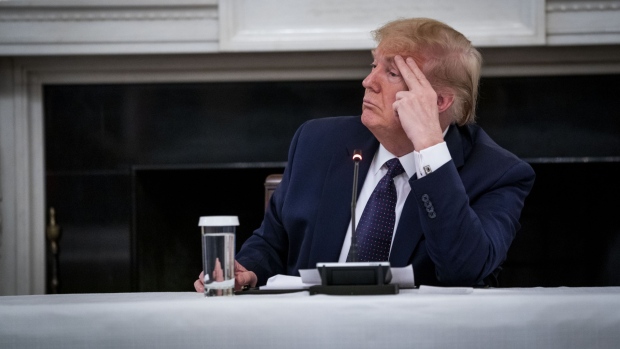 U.S. President Donald Trump listens during a meeting with restaurant executives in the State Dining Room of the White House in Washington, D.C., U.S., on Monday, May 18, 2020. Bloomberg/Doug Mills/The New York Times

A malaria drug that was touted and then taken by President Donald Trump in hopes of preventing coronavirus infection failed to offer patients any protection in the first scientifically rigorous study of its potential to ward off the pathogen.

The study involved 821 health-care workers, first responders and people living with infected patients. Half were given hydroxychloroquine for five days, while the other half received a placebo pill that contained the vitamin folate. After two weeks, 12 per cent of those taking hydroxychloroquine had developed an infection, compared with 14 per cent given placebo, a difference the researchers said could have been due to chance.

The novel coronavirus has sickened 6.4 million people and killed more than 380,000 globally since it emerged late last year in China. Hydroxychloroquine was identified early as a promising medication, since it appeared in laboratory tests to make it more difficult for the virus to penetrate healthy human cells. Its subsequent use in patients, however, yielded mixed findings.

The latest and most definitive study, published in the New England Journal of Medicine, found no benefit and no signs of serious complications, such as erratic heart rhythms that are known to be associated with the drug. About two in every five patients did develop side effects — mainly nausea, upset stomach or diarrhea. Adding zinc and vitamin C didn’t change the study results.

“For post-exposure prevention, this is pretty conclusive evidence that this doesn’t work,” said David Boulware, the senior author of the paper and an infectious-disease physician at the University of Minnesota in Minneapolis. “Once you are exposed, hydroxychloroquine did not work to prevent infection.”

Other studies, including two by Boulware and his team, are looking at different patient populations, including those who are taking the medicine before they are exposed to the virus, and those who begin it after they have already been infected.

The pill gained a following after a small and controversial French study found it helped patients, leading Trump to embrace it. Subsequent studies, including one in the medical journal the Lancet, failed to find a substantial benefit and showed the medication may actually cause serious side effects. Those reports, too, have recently been called into question because of potential flaws in the data the researchers analyzed to draw their conclusions.

The controversy has made it more difficult to complete the rigorous studies needed to get answers, Boulware said.

In the study, researchers gave the medicine to people who had been definitively exposed to the virus within the past four days, then tracked how many developed symptoms of infection. Only a small number of those enrolled were actually tested for COVID-19 since access to diagnostics was limited.

The researchers had hoped the medication, which is widely available and sold inexpensively as a pill, would be an effective tool to help get the outbreak under control. It is the only available alternative to Gilead Sciences Inc.’s remdesivir, an intravenous drug that regulators allowed on the market last month for hospitalized patients in need of oxygen.