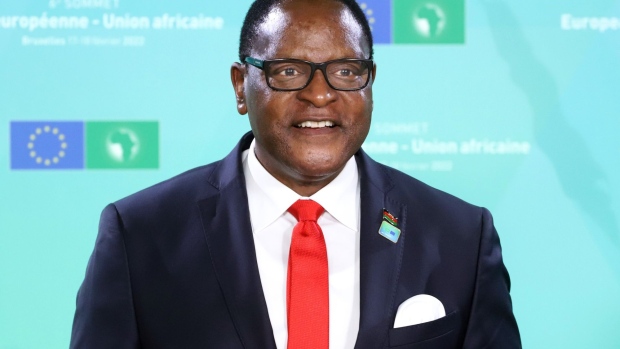 Lazarus Chakwera, Malawi's president, at the European Union-Africa Union Summit in Brussels, Belgium, on Thursday, Feb. 17, 2022. Brussels welcomes about 40 African leaders for the first time in eight years, aiming to reset European relations with the continent as it vies with China for influence. , Bloomberg

(Bloomberg) -- Malawian President Lazarus Chakwera fired his head of police and said he won’t delegate duties to Vice President Saulos Chilima after they were named in a corruption probe.

The duo were among more than 50 public officials to be linked to Zuneth Sattar, a Malawian now based in the UK who is alleged to have paid bribes to win state contracts worth more than $150 million, Chakwera said in an address to the nation Tuesday.

The move is the latest crackdown by Chakwera on graft, one of the issues he campaigned on to win election in a rerun vote two years ago. He fired his entire cabinet in January after just one of his ministers was accused of corruption, while police arrested a former finance minster and ex-central bank governor late last year.

Malawi is one of the world’s least-developed countries, and funding from international donors was halted almost a decade ago following the emergence of a major state corruption scandal. Chakwera has said he expects to clinch a new financing agreement with the International Monetary Fund this year, a deal that would be key to kicking off an economic revival.

Zuneth Sattar was arrested in the UK in 2021 for alleged corruption and is under investigation, the Financial Times reported last month. A London court has refused to let him leave the country, the newspaper said. He denies wrongdoing.

Chakwera said the corruption report was light on detail about how Vice President Chilima was involved with Sattar, one reason he stopped short of a straight dismissal. Chakwera picked Chilima as his running mate in 2020 to unite two opposition parties in his winning election campaign.

The Vice President’s office was not available for comment. However Chilima told reporters last month he wasn’t going to comment on the allegations, preferring to allow the rule of law to take its course.