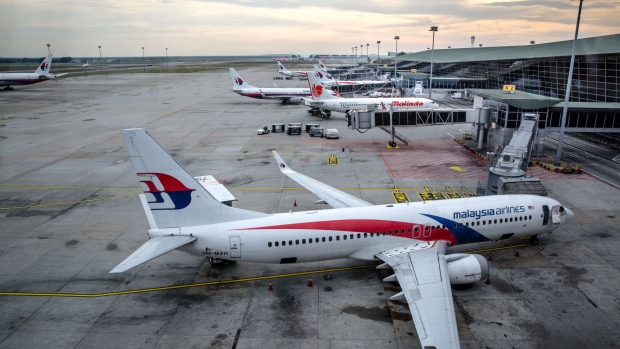 Malaysian Airlines Bhd. and Malindo Airways aircraft stand on the tarmac at Kuala Lumpur International Airport (KLIA) in Sepang, Selangor, Malaysia, on Tuesday, Jan. 17, 2017. The hunt for Malaysia Airlines Flight 370 was called off Jan. 17 after almost three years of fruitless toil. The Boeing Co. 777 aircraft disappeared on March 8, 2014, on its way to Beijing from Kuala Lumpur with 239 people on board. Photographer: Sanjit Das/Bloomberg , Bloomberg

(Bloomberg) -- Malaysia Airlines Bhd.’s parent company was given the nod to implement a wide-ranging restructuring by the majority of its lessors and a U.K. court on Monday, giving a lifeline to the national flag carrier that has floundered amid a plunge in air traffic during the coronavirus pandemic.

Malaysia Aviation Group, which is owned entirely by the country’s sovereign wealth fund Khazanah Nasional Bhd., can now proceed with its plan to reduce the airline’s liabilities of over 15 billion ringgit ($3.7 billion), the company said in a statement.

The carrier in October begun an urgent restructuring exercise that involved renegotiations with leasing companies and creditors, as airlines globally contend with lockdowns and travel restrictions to combat a resurgence of Covid-19 in many countries. Malaysia Airlines has cut salaries for management and pilots, offered unpaid leave to employees, and has sought payment deferrals since March last year.

The financial restructuring exercise, which is expected to be completed in early March, will see the airline “successfully achieve” agreements with a range of its engine, financial and maintenance leasing companies and lenders, as well as Malaysian state entities, it said in the statement.

Khazanah will commit new capital of 3.6 billion ringgit to Malaysia Aviation to fund the airline’s business throughout the restructuring period until 2025.

The airline has also struggled following the disappearance of MH370 and the loss of MH17 in 2014, which led Khazanah to take Malaysia Airline private that year in a bid to save the airline.