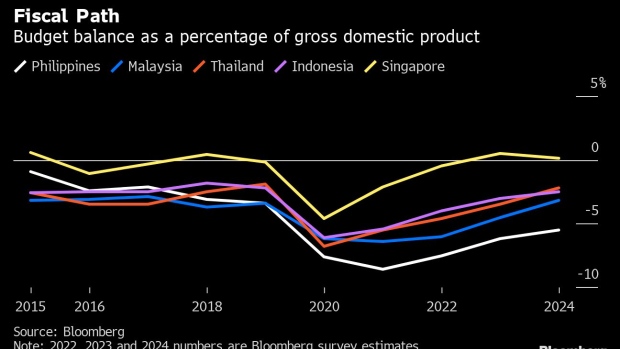 A barber shop in Kuala Lumpur, Malaysia, on Wednesday, Feb. 9, 2022. Malaysia’s economy likely emerged from recession with a 5.6% year-on-year rebound in 4Q, following a contraction of 4.5% in the previous quarter, according to Bloomberg Economics’ estimates. , Bloomberg

(Bloomberg) -- As Malaysia’s Prime Minister Ismail Sabri Yaakob prepares his re-election bid, his administration’s final budget on Friday offers him a rare opportunity to win over voters with spending proposals that many expect will be heavy on feel-good factor and light on new taxes.

Ismail, who is under pressure from his United Malays National Organisation party to call elections before the year is out, needs to get the budget math right before the vote. For that, he must reconcile the goal of narrowing the fiscal deficit to keep investors’ faith in the economy with the need for shielding the masses from high inflation, while ensuring economic growth remains sustainable.

“The budget proposals will be generous, filled with various goodies for the people, providing cash assistance to low-income households,” said Imran Nurginias Ibrahim of BIMB Securities.

Economists expect Malaysia to stick with cash handouts and subsidies for targeted groups, consider a loan moratorium for small businesses to offset rising interest rates and increase allocation for health care, among other measures. The aid is key to helping Ismail build public goodwill, given some 70% of the low-income households in a World Bank survey said they were unable to meet their monthly basic needs.

Here’s what to watch for in the budget:

The government will probably aim to narrow the budget deficit to 5% of gross domestic product, according to a Bloomberg survey of economists. That compares with a target of 6% of GDP for this year. That goal may be achieved by increasing revenue through higher tax compliance, rather than announcing new taxes for locals, or cutting back on subsidies that are expected to reach a record 80 billion ringgit ($17 billion) this year, the survey showed.

Other revenue-raising initiatives could include a 15% tax on multinational companies, increasing government debt by tapping domestic savings or relying on additional dividends from state oil company Petroliam Nasional Bhd. Thanks to high energy prices, Petronas doubled its dividend to the government this year to 50 billion ringgit.

Fiscal consolidation could also be achieved via reduced spending.

The government’s special Covid-19 fund is set to expire next year, and the recent fall in global commodity prices could lower subsidy commitments, according to CGS-CIMB analysts Ivy Ng and Nagulan Ravi. Those factors, as well as implementing targeted fuel subsidies, could result in total savings of about 23 billion ringgit, the analysts said.

Sectors or industries that will likely benefit from the budget include consumer staples, food, affordable housing and tourism, according to Maybank. Eyes will also be on the announcement of new major infrastructure projects, especially the Klang Valley Mass Rapid Transit Phase 3, they said.