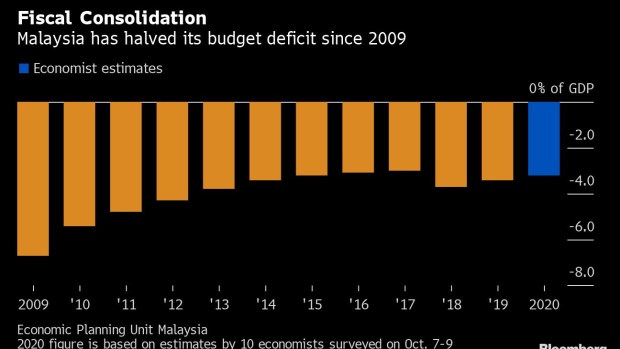 (Bloomberg) -- Malaysian Prime Minister Mahathir Mohamad faces a choice in the 2020 state budget between keeping a pledge to reduce public debt or ramping up spending to weather the U.S.-China trade war.

Economists surveyed by Bloomberg expect the government to set a wider deficit target for next year than previously estimated and announce income-tax cuts, while keeping its promise not to introduce new levies.

Finance Minister Lim Guan Eng has described the budget as an expansionary one that will help counter any negative impact from the trade war. Mahathir, speaking Oct. 5, chose the theme “Shared Prosperity,” hinting at subsidies and handouts as part of a pledge he made to lower living costs after his election last year.

Here’s a snapshot of what to expect:

Lim warned in July that it would be “challenging” for the government to meet its fiscal deficit target of 3% of gross domestic product next year. Analysts agree.

The country is on track to achieve the 3.4% deficit goal for 2019, but is likely to relax next year’s target to 3.2%, according to estimates by 10 economists surveyed by Bloomberg between Oct. 7 to 9. The government is set to continue working toward fiscal consolidation, which will help maintain the country’s credit ratings, but progressing more slowly while boosting short-term spending to bolster growth, they said.

As oil-related earnings decline amid weak crude prices, Mahathir will need to find new sources of state revenue. That could come in the form of asset sales and improvements in tax collection.

The government’s 10-year “Shared Prosperity” blueprint, launched last weekend, focuses on the problem of inequality, an emphasis likely to be reflected in the 2020 budget.

The 2030 vision also could translate into more road projects, schools and hospitals, as well as improvements to ports and airports in rural areas, according to TA Securities Holdings Bhd.

To offset the impact of the trade war between two of the country’s main trading partners, Malaysia could announce a 3 billion ringgit ($715 million) stimulus package as part of its development expenditure, to be devoted to infrastructure and helping companies diversify, RHB Investment Bank Bhd. said.

Despite the budget constraints, Lim has pledged not to introduce new taxes in 2020.

RHB and TA Securities expect some form of corporate or personal income tax cut next year, while United Overseas Bank Ltd. and CGS-CIMB see the government pushing through with a tax on e-commerce announced last year. Maybank expects no new levies and no tax cuts, predicting the government will seek to widen the existing tax base instead.

--With assistance from Cynthia Li.

To contact the reporter on this story: Anisah Shukry in Kuala Lumpur at ashukry2@bloomberg.net