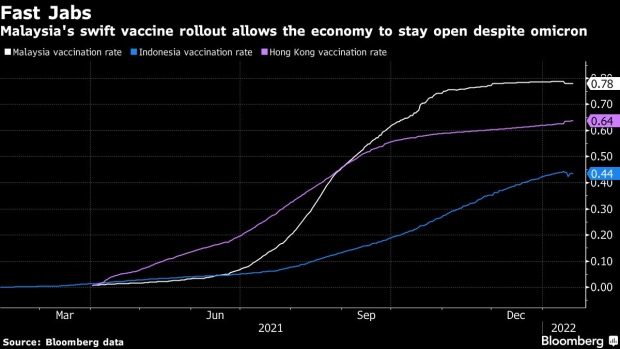 (Bloomberg) -- Malaysia kept its benchmark interest rate at a historic low Thursday, maintaining support for an economy hit in recent weeks by floods and the fast-spreading omicron variant.

Bank Negara Malaysia held the overnight policy rate at 1.75% at its first monetary policy meeting of the year, as predicted by all 25 economists in a Bloomberg survey. The central bank has held borrowing costs steady since July 2020.

“Growth is expected to gain further momentum in 2022. This will be driven by the expansion in global demand and higher private sector expenditure amid improvements in the labor market and continued policy support,” BNM said in an emailed statement. “Risks to the growth outlook, however, remain tilted to the downside.”

Malaysia expects the economy to expand 5.5%-6.5% this year, up from the 3%-4% growth it forecasts for 2021. The year is off to a rocky start, however, as flash floods across several states will cost the economy up to 8 billion ringgit ($1.9 billion) in lost production value and hundreds of omicron cases were identified.

Going forward, a speedy vaccine rollout should stave off blanket containment measures. More than 41% of the adult population had received booster shots as of Wednesday, and Malaysia plans to soon expand its inoculation program to children as young as five years old.

That has fueled optimism for the central bank to raise rates by as much as 50 basis points this year.

Within Asia, Malaysia “is likely to experience one of the stronger domestic demand recoveries,” said Frederic Neumann, co-head of Asian economics and managing director at HSBC Holdings Plc. “So there is a desire by BNM to really start normalizing interest rates again relatively swiftly.”

In its statement, the central bank said it considers current policy to be appropriate and accommodative.

“The stance of monetary policy will continue to be determined by new data and their implications on the overall outlook for inflation and domestic growth,” the bank said.