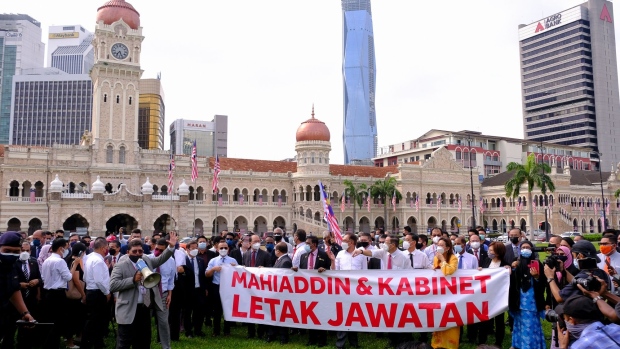 Anwar Ibrahim, Malaysia's opposition leader, center, and other opposition lawmakers hold up a banner at Merdeka Square in Kuala Lumpur, Malaysia, on Monday, Aug. 2, 2021. Malaysian opposition lawmakers marched toward the parliament building in Kuala Lumpur to demand Prime Minister Muhyiddin Yassin's resignation, after officials postponed the day's sitting indefinitely to prevent the spread of Covid-19 in the house. , Bloomberg

(Bloomberg) -- Malaysia plans to debate and annul its emergency laws in parliament next month, ending a days-long standoff between the government and the nation’s king over the matter.

The motion, to be taken up at a Cabinet meeting tomorrow, may help resolve disputes related to the repeal of the emergency ordinance in a “harmonious and constitutional manner,” Prime Minister Muhyiddin Yassin said in a statement on Tuesday.

Muhyiddin has faced calls to resign in recent days after the status of the emergency laws led to a rare rebuke from the monarch. The ruler clarified on Thursday that the ordinances remained in force -- contrary to what a government minister told the parliament earlier -- and that he wished for them to be debated and annulled in the legislative assembly.

The government initially held its ground, saying it had acted in accordance with the constitution in advising the king to bypass the parliamentary process by canceling the laws, the Prime Minister’s Office said in a statement on Friday.

The final session for the special five-day sitting on Monday was postponed indefinitely, citing positive Covid cases. The stand-off prompted 107 opposition lawmakers to march to the parliament building, demanding Muhyiddin resign, but were turned away by police in riot gear.

The United Malays National Organisation, the premier’s most powerful ally, called for an emergency meeting Tuesday “to refine the party’s stance and the next course of action.”

“With the Emergency Proclamation having ended on Aug. 1, the revocation of the emergency ordinances by His Royal Majesty the King no longer arises,” Muhyiddin said, hours ahead of UMNO’s meeting.

Muhyiddin’s statement is a gesture of reconciliation to the palace, “but he’s not out of the woods yet,” said Wong Chin Huat, a professor of political science at the Jeffrey Sachs Center on Sustainable Development at Sunway University in Malaysia. Depending on how royal wrath may be tempered, “we may see apologies or resignation by some key officials,” he said.

The prime minister is set to face a test of support once parliament reconvenes next month. The king’s speech in parliament and the tabling of the 2022 budget will be put to a vote, and their defeat is equivalent to a vote of no confidence, Wong said.