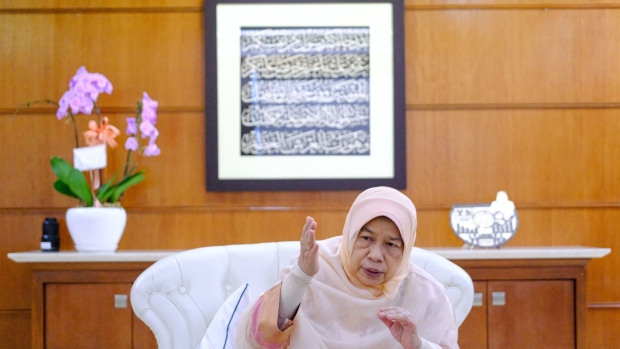 (Bloomberg) -- Malaysia, the world’s second-biggest palm oil producer, has ruled out curtailing cooking oil exports as it has enough supplies to meet local demand and will instead focus on targeting subsidies to ensure it benefits the most needy consumers.

“So far, we have no worries because we definitely have no shortages at all,” Plantation Industries and Commodities Minister Zuraida Kamaruddin said in an interview Tuesday. “Most of the time we export more than half of what we produce, and we still have an excess to export,” she said from her office in the administrative capital Putrajaya.

The nation aims to fill the gap in the edible oil market caused by the Ukraine war, as well Indonesia’s export curbs on palm oil, Zuraida said. She forecasts Malaysia’s palm oil production may rebound to 23 million to 25 million tons in 2022, versus last year’s 18.1 million tons, as pandemic-driven labor shortages ease and foreign workers are allowed back in estates, while smallholders boost productivity to capitalize on high prices.

Around the world, governments are taking to food protectionism to secure local supplies and battle rising food costs, stoked in part by supply shocks caused by the war in Ukraine. Top shipper Indonesia recently temporarily banned palm oil exports, before replacing it with domestic sales quota after farmers protested the move. India has curbed wheat imports and is set to restrict sugar shipments, and Serbia and Kazakhstan have imposed quotas on grain shipments.

Elevated global commodity prices, which were initially expected to ease in the third quarter of the year, will likely remain high toward the year-end or even into 2023 before normalizing, Zuraida said.

That’s problematic for Malaysia, which is a net food importer and exposed to global shocks in the food supply chain.

Prime Minister Ismail Sabri Yaakob on Monday announced that the country will halt exports of chickens from June, and investigate allegations of cartel pricing, as the nation seeks to secure its own supply. The move is likely to hit Singapore, which sources a third of its supply from Malaysia, as well as Thailand, Brunei, Japan and Hong Kong.

The measure will be temporary until prices and production of chicken stabilizes, Agriculture and Food Industries Minister Ronald Kiandee said at the sidelines of a ministry event Tuesday. Both Kiandee and Zuraida said that the government is not currently considering export restrictions on other agricultural commodities.

The government is in the midst of targeting cooking oil subsidies toward lower income groups and small businesses, Zuraida said. Malaysia typically sets aside about 30% of its output annually for its local subsidy program, and the new mechanism may be rolled out this year after it is finalized by the finance ministry, she said.

Zuraida added that the plan to trim export taxes on palm oil may be a temporary measure that’s limited to government-linked companies with downstream operations in foreign countries, such as India and Pakistan. The move is still being discussed with the finance ministry, she said.

While palm oil prices may ease alongside the rival commodities and amid rising output, benchmark futures may stay supported around 4,000 ringgit to 4,500 ringgit a ton into early next year, she said. Prices in Malaysia jumped 3.3% to close at 6,470 ringgit on Tuesday.