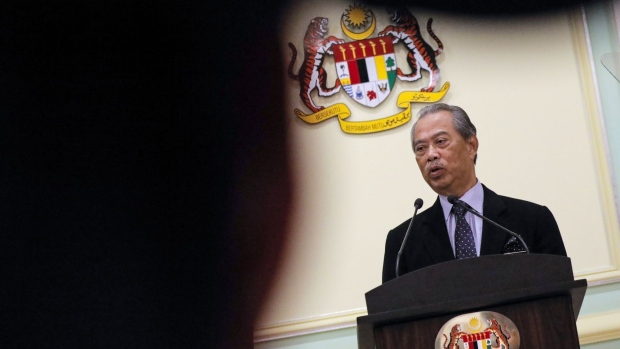 The party, the largest block in the ruling coalition, announced a “political ceasefire” and said it will back the government’s efforts to manage the pandemic and boost economic growth, according to a statement from UMNO president Ahmad Zahid Hamidi.

The expression of support comes a week after UMNO threatened to pull out unless it gets better terms, putting pressure on Muhyiddin to shore up his unstable government or call a snap election. UMNO leaders had complained of being sidelined, especially in the wake of last month’s Sabah election.

Malaysia has tightened curbs on movement and imposed work-from-home orders for about 1 million residents in its capital city of Kuala Lumpur, administrative capital Putrajaya and in the states of Selangor, Sabah and Labuan, as the country battles a spike in virus cases. The nation reported 862 new cases on Tuesday.

Muhyiddin emerged in March as the head of an unwieldy bloc with a majority of only a few lawmakers, prompting constant speculation about the potential collapse of the government. Opposition leader Anwar Ibrahim on Oct. 13 said he had a “convincing majority” of more than 120 of Malaysia’s 222 MPs, and urged the prime minister to resign.

Malaysia’s king last Friday called on politicians to avoid political uncertainty amid the ongoing virus pandemic. The monarch had postponed meeting political leaders to verify Anwar’s claim, as the palace is under a semi-lockdown.