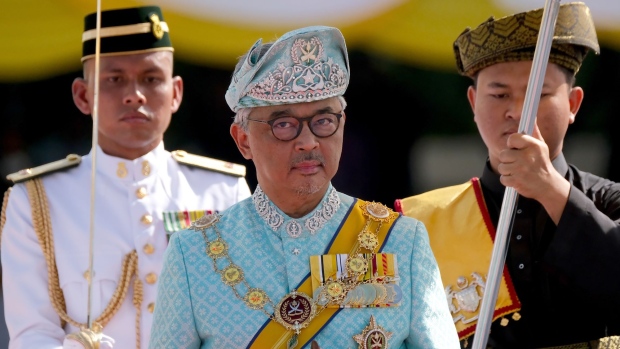 Sultan Abdullah Sultan Ahmad, Malaysia's king, center, onserves an honor guard during a ceremony at Parliament Square in Kuala Lumpur, Malaysia, on Thursday, Jan. 31, 2019. Malaysia has crowned a new king in a traditional ceremony, after the previous monarch stepped down midway through his term in an unprecedented abdication. , Bloomberg

(Bloomberg) -- Malaysia’s king has publicly rebuked a government minister for “misleading” the parliament on laws that were put in place during the country’s state of emergency.

King Sultan Abdullah Sultan Ahmad has yet to consent to canceling the ordinances that were imposed after Prime Minister Muhyiddin Yassin implemented the emergency on Jan. 12, according to a palace statement on Thursday.

Malaysian law minister Takiyuddin Hassan on Monday told parliament the emergency laws had been revoked as of July 21. The move made any debates on the emergency unnecessary, Takiyuddin said, despite protests from opposition lawmakers.

But the king had proposed to Takiyuddin and the Attorney-General last Saturday that the laws should be tabled and debated in the parliament and then revoked, the palace statement said.

“His Majesty states that the honourable minister’s statement in Parliament on July 26, 2021 is inaccurate and has misled members of the house,” the statement said.

Malaysia’s parliament sat for the first time this year on Monday, providing lawmakers an opportunity to grill Muhyiddin over his government’s handling of the pandemic and the economy.

The emergency, set to end on Aug. 1, handed the embattled premier wide-ranging powers to tackle the coronavirus outbreak, including shuttering parliament and introducing ordinances without legislative approval. The move was taken to check the spread of Covid-19.