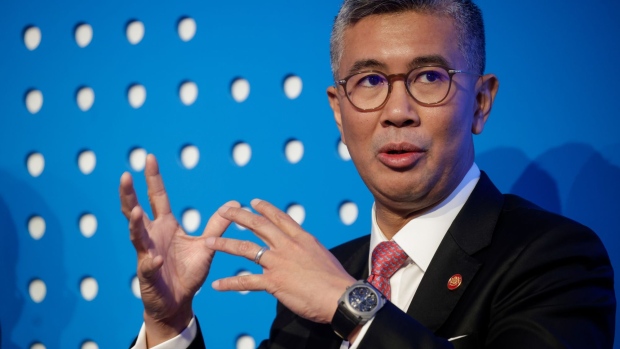 The Petronas Twin Towers are seen through windows of The Exchange 106 tower at the Tun Razak Exchange (TRX) financial district in Kuala Lumpur, Malaysia, Wednesday, Oct. 23, 2019. Southeast Asia's tallest skyscraper was once shadowed by the 1MDB scandal that has upended the nation's politics and implicated global banks in criminal cases. It now seeks to shed that past by plying prospective tenants with marble walls and mirrored ceilings. Photographer: Joshua Paul/Bloomberg , Bloomberg

(Bloomberg) -- Malaysia’s economic growth will accelerate this quarter after expanding at the fastest pace in a year, driven by private consumption as activities resume, Finance Minister Zafrul Aziz said.

“People are underestimating the strength of the pent-up demand,” he said in an interview on Saturday. “Restaurants are packed, traffic jams have returned, the unemployment rate has fallen to below 4% and the first-half tax collections have been way above our estimate.”

Malaysia’s GDP expanded 8.9% in the April-June period from a year earlier, beating the 7% median estimate in a Bloomberg survey. The economic recovery has also been aided by a boom in overseas trade, with both export and import values hitting records in June. The central bank is projecting full-year growth to be at the upper end of its 5.3%-6.3% forecast.

The outlook will be more challenging heading into 2023 because of slowdown fear in the global economy, Zafrul said. Stumbling growth in China -- its largest trading partner -- and the US Federal Reserve’s aggressive monetary tightening are concerns, Zafrul said.

“There are things that are not in our control,” he said, flagging fears about an escalation in tensions between the US and China after US House Speaker Nancy Pelosi’s visit to Taiwan. “We are hoping that the inflation concerns in the US ease and that China addresses its conservative Covid measures.”

Malaysia’s inflation pressures are expected to remain partly contained because of price caps on food items and fuel subsidies, Zafrul said. The government also recently held off on raising electricity and water prices. The consequence -- a subsidy bill for 2022 that will likely total 80 billion ringgit ($18 billion), versus a budgeted 31 billion ringgit.

“Our inflation has been under control relative to what we see in the rest of the world,” Zafrul said. “But this comes at a high fiscal cost.”

The government will rely on revenues from high commodity prices, robust tax collections, a one-off prosperity tax on companies, and dividends from state entities including Petroliam Nasional Bhd. and sovereign wealth fund Khazanah Nasional Bhd., to offset the subsidy bill, he said.

“The easiest way is to borrow more,” Zafrul said, adding there is scope to do so because the debt-to-GDP ratio of 60.4% is still below the statutory debt ceiling cap of 65%. “But we are committed to a fiscal deficit target at 6% of GDP. Pre-pandemic, our deficit was at 3.5%. We have to get there eventually.”

Excerpts from the interview:

Subsidies on fuels and cooking gas alone are projected to be about 37 billion ringgit this year, most of which benefit the higher-income groups, according to the finance ministry. The implementation of targeted subsidies will likely be done in stages and after taking into account the prevailing inflation rate, Zafrul said.

“The ringgit has depreciated against the US dollar, like currencies of many other countries have. Ringgit isn’t the only one that has weakened, though some people are spinning it that way.

“Apart from Bank Negara Malaysia ensuring the currency fluctuations are not severe, it comes down to the economy’s fundamentals. We need to strengthen them and the ringgit will reflect that. The GDP data validates the recovery.”