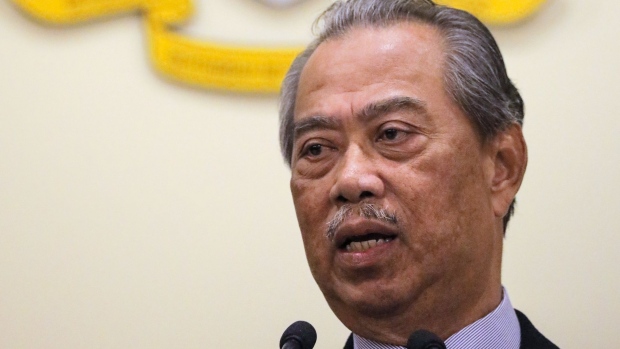 (Bloomberg) -- Malaysia’s largest political party said it is retracting support for the ruling coalition shortly after one of its lawmakers resigned as a minister, putting the administration of embattled Prime Minister Muhyiddin Yassin in a limbo.

Shamsul Anuar Nasarah, a member of the United Malays National Organisation, resigned as the nation’s energy minister Tuesday, shortly before a briefing by UMNO President Ahmad Zahid Hamidi urging Muhyiddin yet again to step down.

Muhyiddin has faced calls to resign in recent days after the status of emergency laws led to a rare rebuke from the monarch. The ruler clarified on Thursday that the ordinances remained in force -- contrary to what a government minister told parliament earlier -- and that he wished for them to be debated and annulled in the legislative assembly.

UMNO has presented enough letters to the king from its lawmakers declaring withdrawal of support for Muhyiddin, Ahmad Zahid added, without revealing their names. The current administration has lost its majority and Muhyiddin “must take responsibility for the failure under his leadership,” he said.

UMNO’s support has been key to Muhyiddin maintaining the razor-thin majority he cobbled together to emerge as prime minister last year. Malaysia’s deputy minister, health minister, and vaccine coordinating minister are among the party’s members.

“Up until last week the government had only 114 seats, and now with the withdrawal of nine more MPs, Muhyiddin has at most 105,” said Wong Chin Huat, a professor of political science at the Jeffrey Sachs Center on Sustainable Development at Sunway University in Malaysia. “If he cannot reverse the loss of majority, his number is going to shrink to two digits in days, if not hours, to come. More UMNO parliamentarians may follow.”

READ: How the Pandemic Is Keeping Malaysia’s Politics Messy: QuickTake

The ruling coalition has the support of more than 110 MPs, Deputy Prime Minister Ismail Sabri Yaakob said in a statement last week. There are 220 members in the lower house of parliament.

The announcement came hours after Muhyiddin said the government plans to debate and annul the emergency laws in parliament next month, as he sought to end the rift between the government and the nation’s king over the matter.

The motion, to be taken up at a Cabinet meeting on Wednesday, may help resolve disputes related to the repeal of the emergency ordinance in a “harmonious and constitutional manner,” he said in a statement.

Muhyiddin has struggled to shore up support for his government since taking power in March last year, facing constant demands from coalition partners and threats of defections. In January he cited the pandemic to impose a state of emergency. Yet, infections have since more than tripled, while confirmed cases breached the one million mark late July.

On July 8, UMNO withdrew support for Muhyiddin over his administration’s handling of the pandemic and the economy, and called for a new leader to take over until fresh elections can be held.

“Will an alternative majority emerge? If there is, the new PM should immediately convene the Parliament to table a motion of confidence in itself, to confirm his power and stabilise politics,” Wong said. “If an alternative majority fails to emerge, the power struggle may drag on. Muhyiddin may stay on or strive to stay on as the minority PM.”