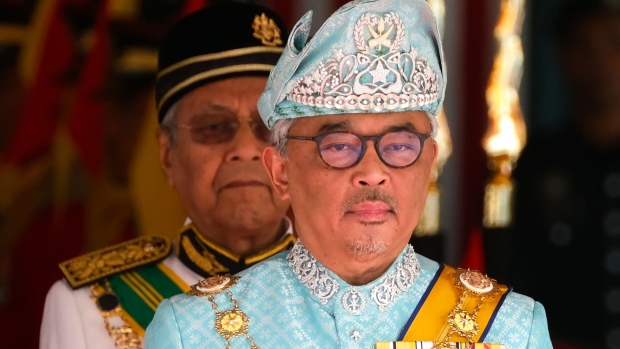 Sultan Abdullah Sultan Ahmad, Malaysia's king, attends a ceremony at Parliament Square in Kuala Lumpur, Malaysia, on Thursday, Jan. 31, 2019. Malaysia has crowned a new king in a traditional ceremony, after the previous monarch stepped down midway through his term in an unprecedented abdication. , Bloomberg

(Bloomberg) -- Malaysia’s royal leaders will meet Wednesday amid growing public anger over the government’s handling of the pandemic during a state of emergency that has left democracy suspended all year.

The meeting, to be chaired by King Sultan Abdullah Sultan Ahmad at 2:30 p.m. local time, comes as daily Covid-19 infections averaged about 5,800 in the past seven days, nearly double than when Malaysia declared emergency rule in January.

“The issue now is whether the emergency, which is set to end Aug. 1, should be continued,” wrote Asyraf Wajdi Dusuki, who heads the youth wing of the ruling United Malays National Organisation, on Facebook Monday. “What’s the use of an emergency if it’s not helping the people?”

Malaysia’s move to declare a state of emergency was the first in more than half a century. It allowed embattled Prime Minister Muhyiddin Yassin to suspend parliament and enact emergency laws without legislative approval, with the aim of bringing the outbreak under control. That also meant no snap polls could be called during that period.

The king may be contemplating doing two things, said Oh Ei Sun, a senior fellow at the Singapore Institute of International Affairs. “Number one is whether to convene parliamentary sitting, even if emergency is ongoing. And number two is a more fundamental question, whether to extend the emergency beyond the first of August.”

Malaysia on Friday extended a nationwide lockdown by another two weeks as virus cases remained elevated. Only essential sectors may operate, while movement is limited to a 10-kilometer (6.2 miles) radius. The curbs could kill off the manufacturing sector, the Federation of Malaysian Manufacturers warned Saturday.

The rulers are unlikely to make major political decisions, said James Chin, a professor at the University of Tasmania. “The royals want to be seen as above politics, so whatever they do, it will be seen as a suggestion, rather than an order.” Still, they’re under tremendous pressure to tell Muhyiddin to reconvene parliament, he added.

Malaysia’s parliament may be allowed to meet around September or October in the third phase of the recovery plan announced by Muhyiddin in an address Tuesday. Malaysia will enter this phase once daily Covid cases fall below 2,000 and 40% of the population is fully vaccinated, he said.

This is the second rulers’ gathering since Sultan Abdullah ascended the throne, and comes after he gathered feedback from political leaders last week. The last Conference of Rulers’ meeting in October resulted in the monarch rejecting Muhyiddin’s initial attempt at seeking an emergency rule in October.

After staying in the background of national politics for decades, Malaysia’s monarch began moving center stage last year to fill a vacuum created following the abrupt resignation of Mahathir Mohamad as premier. The king resolved a week-long impasse by tapping Muhyiddin to become prime minister without a parliamentary vote after opposition leaders had sought meetings with the king while vying for power.