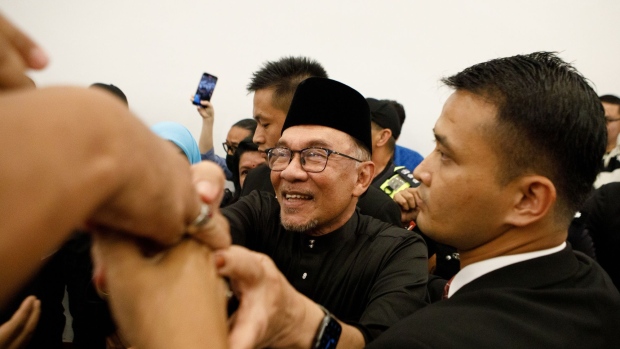 (Bloomberg) -- Malaysia’s ruling parties will sign a coalition agreement to ensure greater stability, in a boost for Prime Minister Anwar Ibrahim ahead of a confidence vote this month.

The pact will be signed once all parties have finalized the terms, Foreign Minister Zambry Abd Kadir said at a press conference in Putrajaya Monday. Zambry is the secretary-general of Barisan Nasional, the second-largest bloc in Anwar’s unity government.

Anwar was named prime minister last month days after the country’s first-ever hung parliament left rival parties scrambling to form new alliances. He now heads a government made up of at least four disparate political groups, and is set to test his strength when parliament convenes on Dec. 19.

It’s a risky move if Anwar doesn’t get a 112 seat majority during the confidence vote, which will push him to step down less than a month after becoming prime minister -- the shortest-ever tenure in Malaysia’s history. It would then fall again on King Sultan Abdullah Sultan Ahmad Shah to determine a new leader who he believes commands the majority.

However, Anwar can propose to the king to dissolve parliament and hold do-over elections. Ultimately it will depend on the monarch on whether this would be the best move for the Southeast Asian country.

Zambry said the deal could generate greater confidence in Anwar’s administration. “We have to take care of every party in this coalition government.”