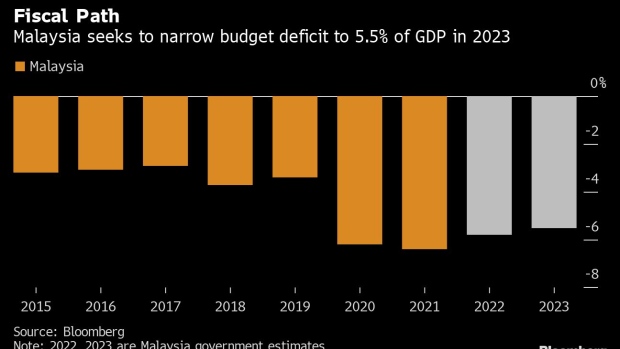 Houses and the skyline in Kuala Lumpur, Malaysia, on Saturday, July 2, 2022. Malaysia's rate decision will be released on July 6. Photographer: Samsul Said/Bloomberg , Bloomberg

(Bloomberg) -- Malaysia’s Prime Minister Ismail Sabri Yaakob Friday sought to balance fiscal discipline, the economy’s growth needs and political realities, with a budget that seeks to narrow the government’s funding shortfall even while lowering tax rates in the run-up to elections.

Spending in 2023 will total 372.3 billion ringgit ($80 billion), down 3% from a record 385.3 billion ringgit estimated for this year, Finance Minister Zafrul Aziz said in his budget speech. The thrifty spending plan reconciles with expectations of weaker revenue after a 2 percentage point cut to personal income tax rates and lower dividend penciled in from state oil company Petroliam Nasional Bhd.

The budget, the last of Ismail’s administration before polls, will make up for tax concessions by trimming subsidies next year, targeting them at the most-needy instead of blanket sops provided earlier to shield citizens from high inflation. That would help ease the fiscal shortfall to 5.5% of gross domestic product from a revised 5.8% of GDP this year.

The benchmark KLCI Index fell 1% at the close, with the gauge holding the day’s losses during the finance minister’s budget speech. The ringgit was little changed at 4.6508 against the dollar, trading near the lowest in 25 years.

“Our pledge is to assist the vulnerable and enhance the social safety net, while effectively managing the nation’s resources by ensuring subsidies are strategically targeted to those who truly need them,” Ismail said in the Fiscal and Economic Outlook reports released alongside the budget.

With expectations for global crude oil prices to average $90 per barrel in 2023, dividend from Petronas is likely to be lower at about 35 billion ringgit next year, according to the budget document. Government revenue is also expected to fall 4.4% from a year ago on the back of slower growth and moderation in global commodity prices.

“It is a tough balancing act in an attempt to sustain growth momentum while recognizing the need to ensure fiscal sustainability,” said Winson Phoon, head of fixed-income research at Maybank Securities Pte. in Singapore. “Between supporting growth and fiscal consolidation, it seems that the preference has tilted slightly to the former as the pace of fiscal consolidation is modest.”

The economy is set to expand at a slower pace of between 4% and 5% next year, weighed down by prolonged geopolitical uncertainties and tightening global financial conditions, the government estimates.

The government is setting aside 95 billion ringgit on development spending next year, and has approved 1,700 new projects totaling 13.7 billion ringgit. These include the construction of the Trans Borneo Highway, Sarawak Sabah Link Road Phase 2, and Pengalat-Papar bypass road in Sabah. The agriculture sub-sector will get 3.1 billion ringgit to address rising concern over national food security.