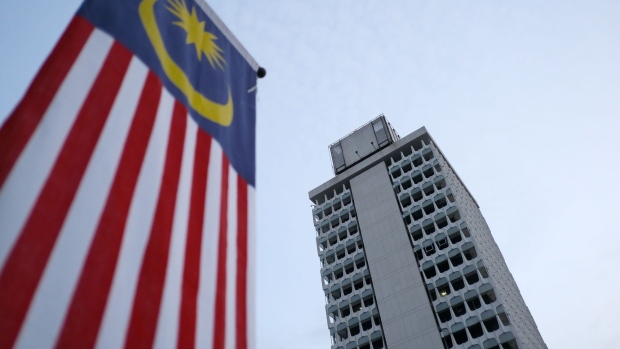 A Malaysian flag stands next to the Parliament building in Kuala Lumpur, Malaysia, on Thursday, Jan. 31, 2019. Malaysia has crowned King Sultan Abdullah Sultan Ahmad in a traditional ceremony, after the previous monarch stepped down midway through his term in an unprecedented abdication. , Bloomberg

(Bloomberg) -- The speaker of Malaysia’s House of Representatives, Azhar Harun, recused himself from making any decision on a motion related to his brother Idrus Harun, the country’s attorney general.

“I have decided to exclude myself from making any decisions regarding, or in any way related, to the motion,” he said in a statement Saturday. He added that any decision would be left to the deputy speakers based on their senority -- who are first, Mohd Rashid Hasnon, and second, Azalina Othman Said.

The motion submitted Thursday by a member of parliament seeks a censure of Idrus Harun on allegations of misleading parliament. It came the same day King Sultan Abdullah Sultan Ahmad rebuked the government for canceling without his consent laws that were imposed without legislative approval throughout Malaysia’s seven-month emergency.

Idrus Harun hasn’t yet made a public statement about the motion.

Malaysia’s parliament sat for the first time this year on Monday, following pressure from the monarch. The five-day session was meant to provide lawmakers an opportunity to grill embattled Prime Minister Muhyiddin Yassin over his government’s handling of the pandemic and the economy. Parliament is set to reconvene Monday next week.