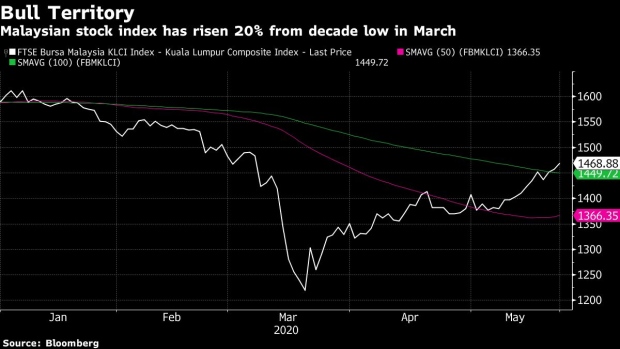 The FTSE Bursa Malaysia KLCI Index gained 0.9% as of 4:08 p.m. in Kuala Lumpur, extending its gain from a low in March to more than 20%. The country is home to the world’s biggest glove makers Top Glove Corp. and Hartalega Holdings Bhd., which have surged in recent weeks due to rising demand for protective equipment during the global coronavirus pandemic.

Malaysia follows peers including Indonesia and Philippines that entered technical bull markets last month. It was only in February that Malaysia’s benchmark index ended a 12-year bull run as a sudden change of government and slowing growth outlook sent stocks tumbling more than 20% from its high.

The country has since reported a surprise expansion in the first quarter, unveiled a $60 billion stimulus package and allowed nearly all business sectors to reopen from early May, which are set to bolster the economy. It has also seen a decrease in the number of new coronavirus cases despite a two-day surge in infections among migrant workers earlier this week. Malaysia added just 10 new cases on Thursday, the least since March 12.

If Malaysia can continue to see lower double-digit or even single-digit daily increases in cases, the government may ease more of the lockdown restrictions that have been in place since March, Director-General of Health Noor Hisham Abdullah said on Thursday.

The rally in Malaysia’s stocks comes as foreign investors have continued to sell their holdings to bring this year’s outflow to more than $3 billion. It’s domestic retail investors that have bought into the market amid low interest rates, said Danny Wong Teck Meng, chief executive officer at Areca Capital Sdn.

“With more retail investors participating in trading, we expect volumes to stay, though expect herd mentality,” he said. “In the longer run, second half of this year would show better prospects than first half.”

(Updates with more detail throughout.)