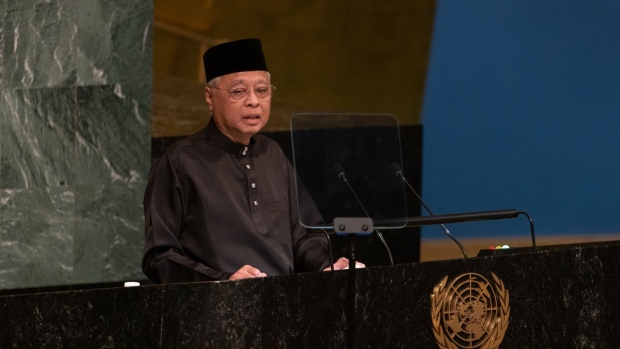 Ismail Sabri Yaakob, Malaysia's prime minister, speaks during the United Nations General Assembly (UNGA) in New York, US, on Friday, Sept. 23, 2022. Russia's Foreign Minister Sergei Lavrov walked out of a UN Security Council meeting where the US and its allies were criticizing President Vladimir Putin's government over the invasion of Ukraine, in a stark demonstration of the divisions opened up by the war. , Bloomberg

(Bloomberg) -- Malaysia’s ruling party said it is Prime Minister Ismail Sabri Yaakob’s prerogative as to when parliament would be dissolved, just days after pushing for an election to be held this year.

“It is up to him to decide when to dissolve parliament. That is not within the party’s powers and we will respect the PM’s prerogative,” UMNO President Ahmad Zahid Hamidi told reporters Tuesday after the party division chiefs’ meeting.

UMNO’s leadership decided late Friday that parliament must be dissolved soon and that Ismail, who is also the party’s vice president, would propose a date to the King for the dissolution. That sparked speculation in local media that he may seek the dissolution before the federal budget is tabled on Oct. 7.

A finance ministry spokesperson said the spending plan would be tabled as scheduled on Friday.

The prime minister has the right to seek dissolution of parliament but the King has the final say, Bernama and other local media cited Ismail as saying earlier today.

Under Malaysian laws, an election must be held within 60 days of parliament’s dissolution.