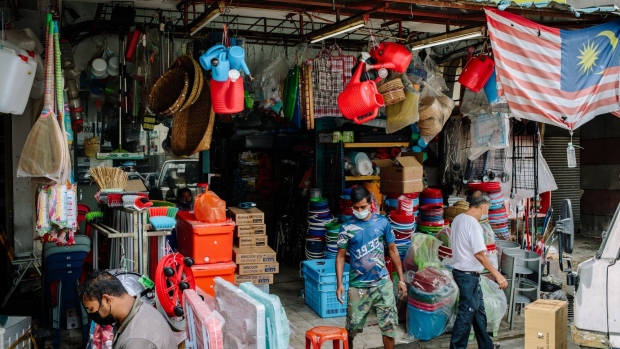 A sundry store in Kuala Lumpur, Malaysia, on Wednesday, Feb. 9, 2022. Malaysia’s economy likely emerged from recession with a 5.6% year-on-year rebound in 4Q, following a contraction of 4.5% in the previous quarter, according to Bloomberg Economics’ estimates. , Bloomberg

(Bloomberg) -- Malaysia’s economic outlook could be hurt by pessimism in the global economy even as officials keep to current domestic projections for growth, Finance Minister Zafrul Aziz said.

While Malaysia’s expansion has been strong after a reopening of borders and amid booming exports, it must be prepared for a slowdown in the world economy, he said. There are rising global recession risks sparked by an aggressive monetary tightening in the US and stumbling growth in China, Zafrul said.

“The IMF has cut its global 2022 GDP growth projections from 3.6% to 3.2%, and 2.9% for 2023, dubbing the world’s economic outlook gloomy and uncertain,” Zafrul said in an address at the Malaysian Student Leaders Summit on Saturday. “The weaker global outlook will certainly impact us.”

Malaysia’s gross domestic product grew 5% in three months to March and its employment rate has been on a declining trend for over a year. GDP data for the second quarter, due next week, is also likely to show strength going by “the return of traffic jams and packed eateries,” Zafrul said.

“At this point, we remain optimistic that we will be able to stick to our official projections,” Zafrul said, highlighting how the monetary tightening by the Fed has led to the weakening of currencies including the ringgit. It recently fell to a five-year low versus the dollar.

“The risk of the US entering a recession, technical or not, makes the global outlook even bleaker,” he said.

Zafrul’s comments echo the outlook from CGS-CIMB Research, which expects Malaysia’s growth to slow to 4.1% in 2023, from an estimated 5.2% this year. The country’s external trade will bear the impact of the global slowdown as its growth correlation with the world economy has become stronger over the past decade, the firm said last month.