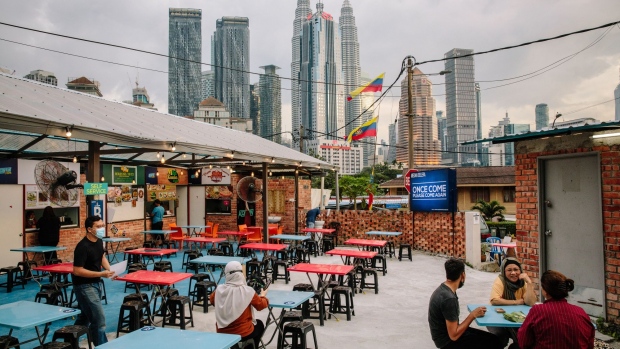 An outdoor restaurant near the business district in Kuala Lumpur, Malaysia, on Wednesday, Feb. 9, 2022. Malaysia’s economy likely emerged from recession with a 5.6% year-on-year rebound in 4Q, following a contraction of 4.5% in the previous quarter, according to Bloomberg Economics’ estimates. , Bloomberg

(Bloomberg) -- Bank Negara Malaysia said that the movements in the ringgit would continue to be market determined and that it will ensure orderly financial conditions amid the turbulence in global financial markets.

The decline in the ringgit to multi-year lows has been fueled by the persistent strength in the US dollar, which has appreciated against almost all currencies, the central bank said in a statement on Friday.

“Malaysia remains an open economy. Rather than resorting to capital controls or re-pegging of the ringgit, the policy priority now is to sustain economic growth in an environment of price stability and to further strengthen domestic economic fundamentals through structural reforms,” Governor Nor Shamsiah Mohd Yunus said.

BNM’s statement comes during a week that saw Japan’s first market intervention in over two decades to halt the yen’s drop against the dollar. The Federal Reserve’s hawkish remarks on keeping rates higher-for-longer to control inflation has piled pressure on Asian currencies, including Malaysia’s ringgit which weakened to a 24-year low.

Malaysia has raised borrowing costs thrice this year to 2.50% to fight pressures, with three Southeast Asian peers, including Indonesia and the Philippines, adding to the tightening trend on Thursday. The Philippine central bank separately signaled Friday that it may resort to more interest-rate hikes depending on the Fed’s actions, while also considering active market interventions to curb currency losses.

(Updates with details of interventions by Asian central banks. A previous version of this story was corrected to fix central bank abbreviation in headline.)