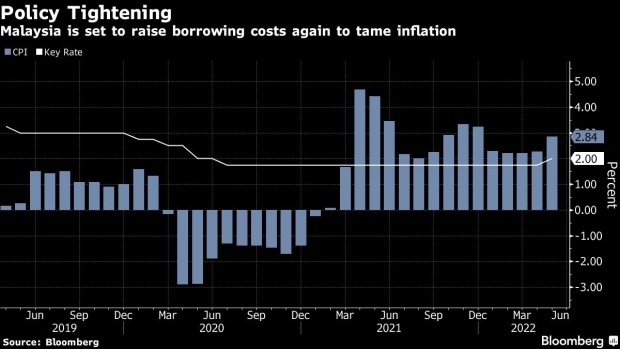 The Bank Negara Malaysia headquarters in Kuala Lumpur, Malaysia, on Friday, May 13, 2022. Malaysia’s economy grew at a faster-than-expected pace in the first quarter of the year as activity picked up with the easing of virus restrictions. , Bloomberg

(Bloomberg) -- Malaysia is expected to raise its main policy rate for a second straight meeting on Wednesday, as the nation’s central bank begins to feel pressure from stubborn inflation and a stronger dollar in the face of an aggressive US Federal Reserve.

Bank Negara Malaysia will increase the overnight policy rate by 25 basis points to 2.25%, according to 18 of the 19 economists surveyed by Bloomberg, while one sees no change. BNM unexpectedly hiked rates in May -- the first increase since January 2018 -- to head off inflation.

While the central bank has signaled no rush to match the Fed’s accelerated pace of monetary tightening, pressure to hike faster is mounting as firmer domestic demand from reopening the economy, supply disruptions due to the Russia-Ukraine war and a weak ringgit increases the cost of living in the Southeast Asian nation.

Here’s what else to watch for in Wednesday’s statement:

Malaysia’s latest headline inflation print of 2.8% is much lower than in other countries due to a plethora of subsidies. Still, food inflation rose at the fastest pace since October 2011, prompting the government to extend price caps on chicken and eggs, and provide cash aid for the most vulnerable.

Finance Minister Zafrul Abdul Aziz last week warned that inflation rate for May could have topped 11% without subsidies. While the government is, for now, continuing steps to shield consumers from the rising cost of living, the markets will look for the central bank’s outlook on prices and how it plans to tackle growing pressures.

“Inflation is looking less benign and is poised to rise further with reopening and constraints on the government’s ability to subsidize higher costs for essentials.”

“Headline CPI growth may breach 5% in the third quarter should headwinds persist and the government further adjust subsidies for other price-administered items,” UOB’s economists said, posing an upside risk to their full-year estimate of 3%. That compares with BNM’s price-growth forecast of 2.2%-3.2% for 2022.

Analysts will watch for any change in BNM’s language from May when it said it would start tightening in a “measured and gradual manner” to ensure that monetary policy remains accommodative.

Even after a projected 75 basis-points rate increase for the year, monetary policy would still be easy as it only reverses part of the 125 basis points of easing during the pandemic, according to UOB.

Gross domestic product grew a faster-than-expected 5% in the January-March period from a year ago, stoking optimism the country’s recovery has reached firmer footing. S&P Global Ratings last month projected Malaysia’s GDP growth to hit 6.1% for 2022, in line with BNM’s estimate of 5.3%-6.3%.

The central bank may still reiterate that risks to the growth outlook remain tilted to the downside amid concerns that global food and energy prices may stay higher for longer, with lingering supply disruptions likely to keep inflation elevated.