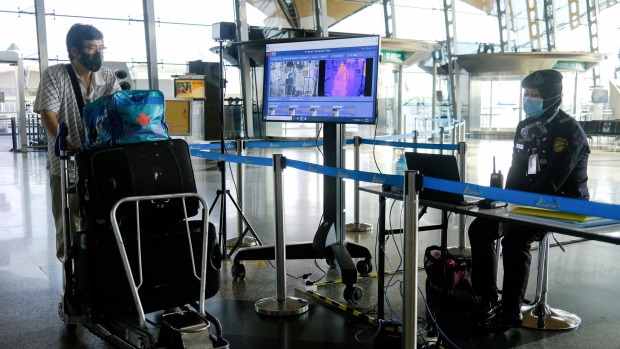 A monitor shows a thermographic image of a person walking through a temperature screening point at Kuala Lumpur International Airport (KLIA) in Sepang, Selangor, Malaysia. on Friday, June 12, 2020. Malaysia further eased restrictions on people's movement, allowing most activities including domestic tourism to resume on June 10, after letting nearly all sectors of the economy to reopen in early May. , Bloomberg

(Bloomberg) -- Malaysia will impose tighter border controls over countries that have reported the spread of the omicron variant of Covid-19, Defense Minister Hishammuddin Hussein said in a statement Tuesday.

The health ministry will make a detailed announcement on the matter soon, Hishammuddin said, noting the spread of the variant in countries including Italy, Denmark, Australia and the U.K.

The statement came a day after Malaysia and Singapore opened land and air vaccinated travel lanes, with plans to further reopen their borders. Malaysia on Friday banned travel to and from southern Africa after the discovery of omicron.

The four ministers in charge of managing the pandemic have decided to pause the nation’s efforts to move to the endemic phase until they obtain more information on the variant, Hishammuddin said.

Researchers worldwide are racing to understand the full impact of the new strain, and governments have banned travelers from South Africa and nearby countries on concerns omicron could evade the protection of vaccines and fuel new surges.