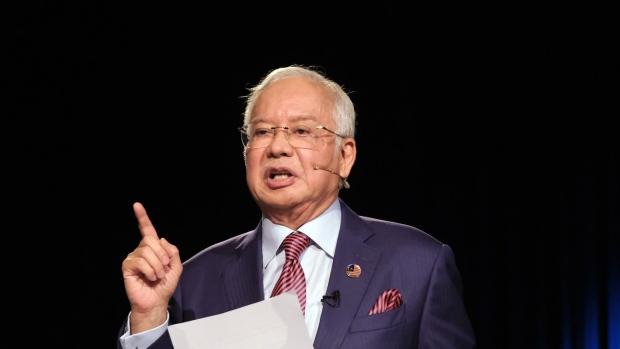 Najib Razak, Malaysia's former prime minister, during a public debate with Anwar Ibrahim, Malaysia's opposition leader, at the Malaysia Tourism Centre (Matic) in Kuala Lumpur, Malaysia, on Thursday, May 12, 2022. Malaysia's ruling pro-Malay party said in April it will back Prime Minister Ismail Sabri Yaakob as its candidate for the top role in a show of unity ahead of the next national election that may be held as soon as August. , Bloomberg

(Bloomberg) -- Malaysia’s highest court on Thursday rejected a request by former Prime Minister Najib Razak’s new counsel to discharge himself as defense lead, denying a bid that could have delayed the ex-leader’s appeal, Malaysiakini reported.

The newly-appointed laywer, Hisyam Teh Poh Teik, applied to discharge himself from leading the defense team due to time constraints, the local news outlet reported. The Federal Court earlier this month rejected a request to delay the proceedings because Najib changed his legal team, local media reported at the time.

The court has begun hearing Najib’s appeal to overturn his jail sentence for corruption in a case linked to a former unit of 1MDB. The hearing is due to run until Aug. 26. An earlier request by his legal team to introduce new evidence was also denied.

Najib in December failed to overturn his 12-year prison sentence after the Court of Appeal affirmed he was guilty of all seven charges in the case involving 42 million ringgit ($9.4 million) belonging to SRC International. He is out on bail pending the Federal Court hearing.