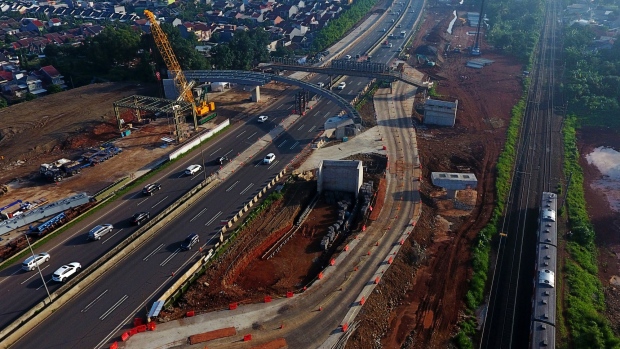 A crane stands at a construction site as vehicles travel along the Jakarta-Serpong Toll Road in this aerial photograph taken in Jakarta, Indonesia, on Friday, Feb. 1, 2019. Indonesia is scheduled to release fourth-quarter gross domestic product (GDP) figures on Feb. 6. , Bloomberg

(Bloomberg) -- Khazanah Nasional Bhd., Malaysia’s sovereign wealth fund, received an offer of about $500 million for its stake in an Indonesian toll-road operator, according to a person familiar with the matter.

Indonesia’s Astra Infra teamed up with the Canada Pension Plan Investment Board in bidding for PT Lintas Marga Sedaya, the concession holder of a 117-kilometer (73-mile) toll road connecting Jakarta to Cirebon in the western part of the Java island, said the person. Khazanah’s board is meeting Friday to discuss the offer and the sovereign wealth fund may or may not accept it, said the person, asking not to be named as the information is private.

Khazanah controls 55% of Lintas Marga through its unit UEM Group Bhd., while Astra Infra owns the remaining 45% of the toll-road operator. The Indonesian company has first right of refusal on UEM’s holding in Lintas Marga, said the people. Astra Infra is wholly owned by car company PT Astra International.

In 2006, UEM Group was awarded the highway project, called Cikopo-Palimanan and also known as the Cipali toll road, but construction didn’t start until 2013 as the company needed to complete land acquisition and get the required regulatory approvals. The project was finished in 2015 and is the Malaysian group’s first highway concession in Indonesia.

--With assistance from Yudith Ho and Scott Deveau.

To contact the editors responsible for this story: Fion Li at fli59@bloomberg.net, Ville Heiskanen