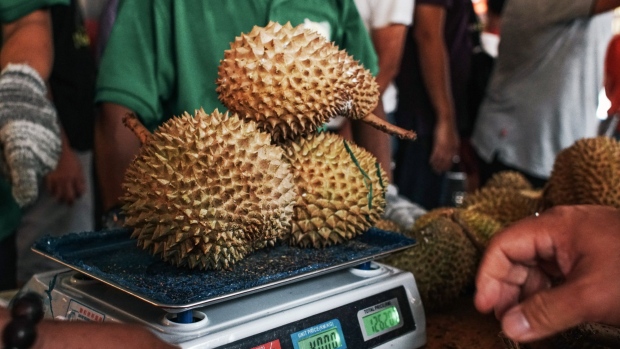 (Bloomberg) -- Malaysian durians have topped fruit and vegetable presales at a big Chinese retail festival, showing the pulling power of the pungent delicacy.

The top-selling variety at JD.com’s 618 festival -- China’s second-largest shopping event after Alibaba’s Singles’ Day -- was the Sultan durian from Pahang state, according to local media that cited data from the e-commerce giant. Sales have even exceeded that of ice cream and peaches.

With its creamy custard-like flesh and powerful odor, the thorny fruit has surged in popularity in China. Imports of fresh durians quadrupled to $2.3 billion last year from 2017, according to United Nations data, and they overtook cherries to become the country’s No. 1 fruit import by value in 2019.

Though ‘DurioTourism’ -- where Chinese tourists visit Malaysian farms -- is currently at a halt due to travel restrictions, durian diplomacy is still going strong. MAPC Sdn. Bhd., Malaysia’s largest durian supplier that exports about 90% of its fruit to China, has set up seven centers to promote the Musang King variety in second- and third-tier Chinese cities over the past year.

It will add another 15 this year to lure more consumers with free samples, said Sam Tan, the company’s executive director who is also the president of the Malaysia Durian Exporters Association. “Less than 10% of China’s population has ever tasted Malaysian durians,” he said. With more farmers joining the industry, our supply is expected to expand at least 50% a year, Tan said.

Unlike Thai growers who pluck durians from the tree at 85% maturity to prolong the period they can be stored for, Malaysian farmers typically wait for the fruit to ripen and drop to the ground. That locks them out of the Chinese market for fresh durians, which is currently dominated by Thailand.

Malaysia used to send its durians to China only as pulp and paste but won approval to export frozen fruit in 2019. Exemplified by premium varieties such as Sultan and Musang King, the full-maturity fruit have a reputation for quality and are sought after by aficionados who view them as ‘designer durians.’

“Harvesting when the durian drops has been our tradition since the 1950s,” said Wilson Chang, a second-generation durian farmer in Pahang state. “Our foremost concern is ensuring quality and taste. Already the demand for our durians far exceeds our supply.”