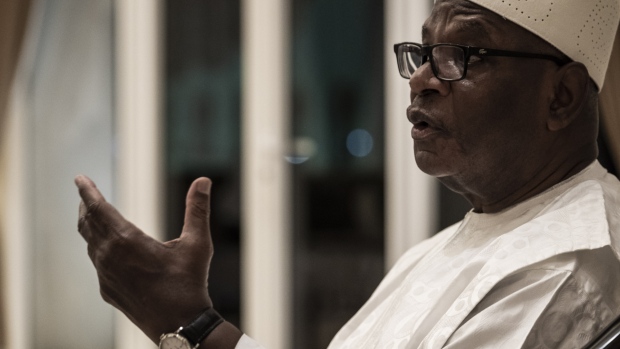 Ibrahim Boubacar Keita, Mali's president, gestures as he speaks during an interview in Bamako, Mali, on Wednesday, Sept. 19, 2018. Mali is the third-biggest gold producer in sub-Saharan Africa and the continent's largest cotton grower. , Bloomberg

(Bloomberg) -- Mali adopted a law to extend the mandate of the National Assembly until May 2020, the government said in a statement following an extraordinary cabinet meeting Friday.

The bill allows the government to secure “optimal conditions” for well-organised legislative elections, according to the statement, which said a transparent vote isn’t currently possible due to the “political and security situation.”

Legislative elections were initially scheduled for Oct. 28, 2018 and then delayed several times. The current mandate of parliament ends on June 30.

To contact the reporter on this story: Bokar Sangare in Accra at bsangare1@bloomberg.net

To contact the editors responsible for this story: Karl Maier at kmaier2@bloomberg.net, Pauline Bax, Jon Menon