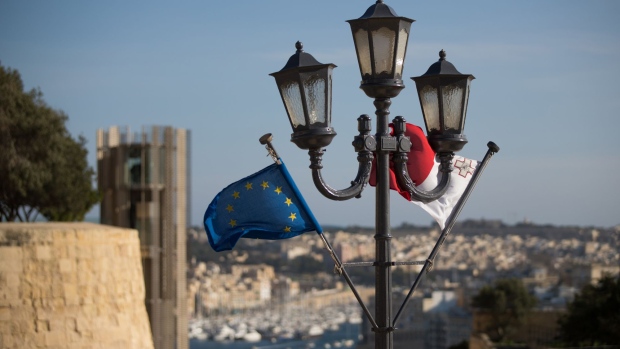 The European Union (EU) flag, left, and the national flag of Malta fly as luxury vessels sit moored beyond at Vittoriosa Yacht Marina beyond, in Valletta, Malta, on Thursday, Feb. 2, 2017. It may be smaller than the smallest English county, but Malta provides an insight into the European allegiances that Britain will hit head on after firing the starting gun on Brexit negotiations in coming weeks. Photographer: Jasper Juinen/Bloomberg , Bloomberg

(Bloomberg) -- Malta faces a lawsuit at the European Union’s top court as authorities crack down on member states selling citizenship rights to live and work in the bloc.

The European Commission on Thursday said it will refer Malta to the EU’s Court of Justice for its investor citizenship scheme, which is often referred to as golden passports.

“Granting EU citizenship in return for pre-determined payments or investments without any genuine link to the member state concerned is not compatible with the principle of sincere cooperation enshrined” in the bloc’s rules, the commission said in a statement.

The so-called investment migration industry has proven lucrative for Europe, where participating member states netted more than 21 billion euros ($20.3 billion) between 2011 and 2019 in investment from individuals in return for a passport, according to the European Parliament.

Malta said it’s been cooperating with the commission “constructively and in good faith” and that it “strongly rejects the interpretation given by the commission.”

The program is based on “robust due diligence processes which address the risks related to money laundering and the financing of terrorism and ensure that only worthy individuals would acquire Maltese citizenship and consequently European citizenship,” Malta’s home affairs ministry said in a statement.

The EU in 2020 issued Malta and Cyprus with a legal ultimatum to stop offering their golden passports programs. Cyprus at the time had already announced it would end its current passport for investment program, but has since continued to process pending applications, the EU said.

“Cyprus finished processing all pending applications in July” last year, but the commission said it’s continuing to “closely” watch the situation there before deciding on next steps.

Malta suspended its program following Russia’s invasion of Ukraine this year, but only for nationals from Russia and Belarus.

“While this was a positive step, Malta continues to operate the scheme for all other nationalities and has not expressed any intention to end it,” the commission said.