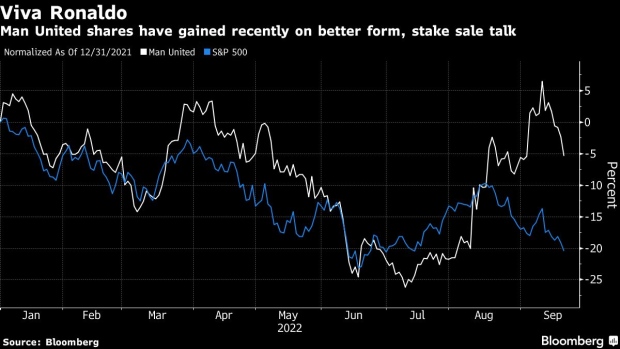 Manchester United signage on a monitor on the floor of the New York Stock Exchange (NYSE) in New York, US, on Friday, Aug. 26, 2022. Stocks sank as Jerome Powell gave a short and clear message that rates will stay high for some time, pushing back against the idea of a Federal Reserve pivot that could complicate its war against inflation. , Bloomberg

United reported a net loss of £115.5 million ($130.7 million) in the 12 months through Jun. 30 versus a £92.2 million loss in the prior year. It said in a statement that broadcasting revenue dipped due to the men’s team finishing sixth in the Premier League versus a second-place finish in the prior year, while it also played fewer games across all competitions.

The club, home of superstar Cristiano Ronaldo, predicted a fiscal 2023 adjusted Ebitda of £100 million to £110 million. That would be an improvement on the £81.1 million reported for 2022 on Thursday.

The shares, which are traded in New York, are down about 5% this year versus a 20% plunge for the S&P 500. The stock gained last month on news that the Glazer family would consider selling a minority stake in the club.