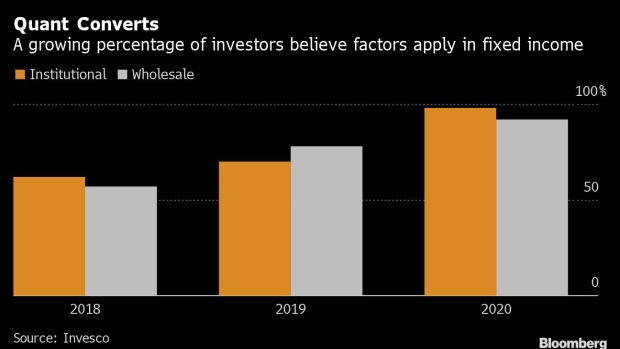 (Bloomberg) -- Many of the biggest quant strategies in the stock market these days are plagued by doubt and debate. In fixed income, they just got a $25 trillion endorsement.

Almost every respondent in Invesco Ltd.’s annual survey of institutional and wholesale investors said they think factor investing can be applied to the world of fixed income.

The proportion of believers in this systematic approach -- which picks assets based on characteristics like how cheap or profitable they are -- has jumped to 95% from 74% last year, Invesco said. In 2018, that stood at just 59%.

While the zero-rate world is hitting future returns in fixed income, it’s the very thing spurring interest in this new hunting ground for quants.

“Coming from a 30-year bull market in fixed income, statistically speaking, whatever you bought it would have got you a decent return,” Georg Elsaesser, a portfolio manager at Invesco, said by phone. “That’s changed now. Interest rates can barely go lower, so there’s a much more pressing need for alternative return sources.”

With nearly $17 trillion of global debt already yielding below zero, 40% of those polled said they’re already implementing factors in fixed income. Another 35% of respondents said they are considering it.

The survey -- which was conducted in the second quarter among investors with more than $25 trillion under management -- targeted those who already use factors in some manner. But the optimism surrounding the approach in bonds stands out at a time when several major equity factors are under pressure.

Invesco, which sells factor funds, offers some solace on that front. While equity quant funds have largely trailed fundamental ones and benchmarks in recent years, the study showed less than 5% of respondents planning to cut their factor allocation in the coming year, with the rest intending to maintain or boost it.

The majority said factor performance in the year through March was either in line with or exceeded their expectations. There was encouragement for defenders of the value factor, in particular: 74% said they believe in the long-term efficacy of betting on cheap securities.

“They’ve been painfully underperforming -- at least some of them -- but it’s been absolutely consistent with the market environment,” Elsaesser said, referring to equity factors. “If you want to paint a classically adverse scenario for factors you’d probably have chosen a scenario like the one we’ve seen in the last two years.”

Meanwhile, a growing majority of respondents said they now use factor exchange-traded funds. Institutional investors using them hold on average 14% of their factor allocation in such products, and for wholesale respondents it was 50%.

And a little more than half of respondents said they incorporate environmental, social and governance concerns in their factor portfolios, while another 20% said they’re considering it.