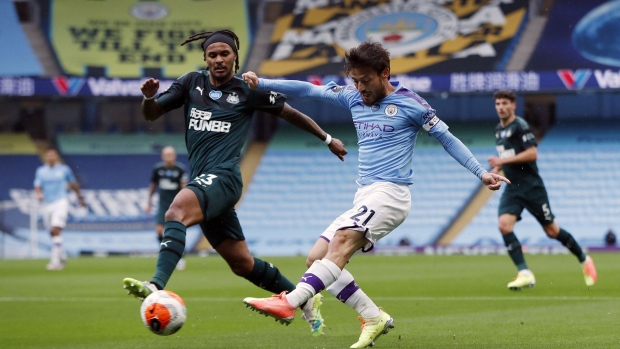 MANCHESTER, ENGLAND - JULY 08: Valentino Lazaro of Newcastle United battles for possession with David Silva of Manchester City during the Premier League match between Manchester City and Newcastle United at Etihad Stadium on July 08, 2020 in Manchester, England. Football Stadiums around Europe remain empty due to the Coronavirus Pandemic as Government social distancing laws prohibit fans inside venues resulting in all fixtures being played behind closed doors. (Photo by Lee Smith/Pool via Getty Images) , Photographer: Pool/Getty Images Europe

Manchester City won its appeal against a ban from the Champions League, in a victory for the club’s owners, Abu Dhabi’s royal family and U.S. private equity firm Silver Lake.

Soccer governing body UEFA had barred the English Premier League team from Europe’s most prestigious competition for two seasons and fined it 30 million euros (US$34 million) for overstating sponsorship revenue between 2012 and 2016.

The independent Court of Arbitration for Sport in Switzerland said Manchester City did not hide equity funding as sponsorship contributions, but did fail to cooperate with UEFA authorities. The fine was also reduced to 10 million euros

At stake was a potential 100 million euros a season in revenue, the ability to hang onto top players who want to compete at the highest level and pride in one of the world’s most famous soccer clubs. No team from any of the big five leagues in Europe has ever been banned from the Champions League for breaching its financial fair play rules.

Since being acquired by Abu Dhabi in 2008, Manchester City has grown to become the world’s sixth-biggest soccer club with annual revenue of more than 600 million pounds, according to Deloitte’s Money League. Last year it won the Premier League, the world’s richest soccer competition. Silver Lake owns around 10 per cent of Manchester City, valuing it at about 5 billion pounds.

Under the financial fair play rules introduced in 2011, teams have to balance their spending within revenues and are prevented from accumulating debt.

Rivals say that breaches of the regulations allow the offending teams to spend more on top players, distorting competition.