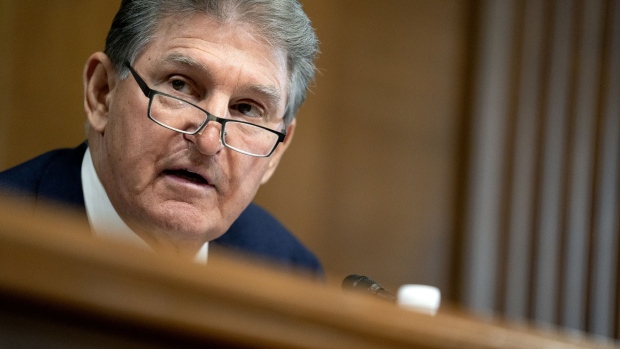 Senator Joe Manchin, a Democrat from West Virginia, speaks during a Senate Energy and Natural Resources Committee hearing in Washington, D.C., U.S., on Tuesday, Nov. 16, 2021. The non-partisan Congressional Budget Office said its full cost estimate of the White House's signature tax and spending bill might not be ready until Friday, threatening to push a planned House vote on the legislation to the weekend or later. , Bloomberg

The West Virginia lawmaker said he’s still reviewing a version of the legislation passed two weeks ago by the House, and has made no decisions about timing for debate and whether he can support a bill after the Senate completes its own draft. He said he remains opposed to the paid family leave provision in the House measure.

Schumer said on the Senate floor Monday that his “goal” is to finish and pass the legislation before Congress breaks for the Christmas holiday.

Manchin again raised concerns about the impact of more federal spending on inflation, telling reporters that he heard deep concerns about rising prices from his constituents during a week-long Thanksgiving break. The discovery of a new variant of the Covid-19 virus adds to economic uncertainty, he said.

“The unknown is great right now and it gets greater,” Manchin said. “Inflation is now more than transitory. We found out it’s not transitory. And on top of that, you have this new strain of Covid they’re very much concerned about. No one knows what effect it’s going to have. And you have inflation on top. So all these things give you cause to pause.”

With the Senate is split 50-50 between the two parties and Republicans united in opposition to the Biden agenda, Manchin’s support for the legislation is critical to passage.

Congress is facing a more certain deadline to raise the federal debt ceiling by the middle of the month. Manchin reiterated that he supports considering a debt ceiling increase through reconciliation, which allows Democrats to pass it on their own. But he pointed out that Schumer and Senate Minority Leader Mitch McConnell are engaged in talks over how to handle the matter, and he’s not sure what they’ll decide.

“I’m really concerned about the high gas prices,” he said. “I heard an awful lot over the Thanksgiving break that prices were high and people are very much upset about that.”