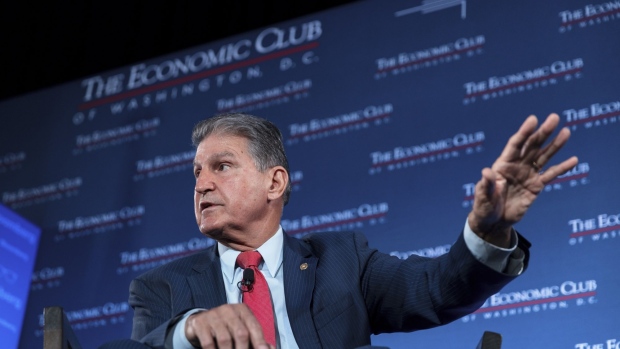 “No one should be in anyone’s bank account,” the West Virginia Democrat told reporters Tuesday.

Democrats have been looking to the bank reporting proposal to raise hundreds of billions of dollars to offset much of the cost of a nearly $2 trillion social spending bill. Senator Kyrsten Sinema, another crucial swing vote on the package, opposes increases to tax rates, forcing Democrats to scrounge for alternatives. Manchin’s opposition to the bank reporting requirement makes that effort even more difficult.

The bank reporting proposal is one of the most controversial revenue ideas under consideration. The plan would require banks to report aggregate inflows and outflows to accounts that exceed $10,000. Democrats had made some changes to the proposal in recent weeks, such as excluding payroll deposits, to narrow the scope of the accounts that would be reported.

Manchin, whose vote is pivotal in the evenly divided Senate, said Tuesday morning that he told Biden he disapproved of the idea. Democrats need 50 votes to push the tax and spending package through the Senate.

“I said, ‘Mr. President I don’t know what happened. This cannot happen. It’s screwed up.’” Manchin said in an interview with Bloomberg Television’s David Rubenstein at the Economic Club of Washington, D.C.  ‘I think that one is going to be gone.”

Senate Finance Chair Ron Wyden, who is drafting the proposal, said he has heard some concerns from colleagues. House Ways and Means Chairman Richard Neal said Democrats should listen to Manchin’s concerns and address them so they can win his vote on the overall package.

The Treasury Department has said the bank reporting proposal could raise as much as $460 billion, though other estimates have projected significantly less revenue.

Wyden said he plans to release a plan Wednesday that would tax the unrealized gains of billionaires, as an alternative to raising income rates. That idea is facing resistance from several House Democrats. Democrats are looking at other options including a stock buyback tax and a corporate minimum tax to win Sinema’s support.

House leaders say they could vote on a bill as soon as this week, however, that is increasingly unlikely as lawmakers continue debating the bill’s details.