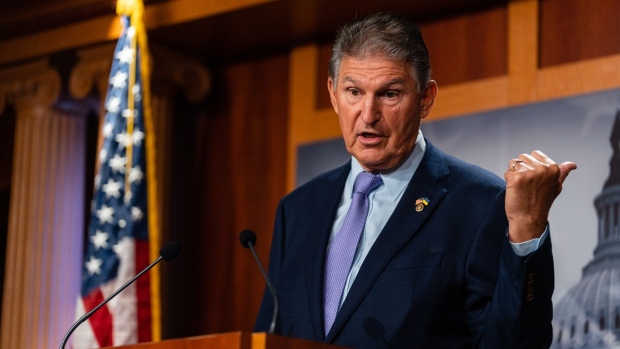 (Bloomberg) -- The Senate voted Tuesday to advance a stop-gap funding bill to keep the government running after Senator Joe Manchin dropped his bid to include a controversial energy permitting bill amid opposition from Republicans and some Democrats.

Shortly after the West Virginia Democrat asked Senate Majority Leader Chuck Schumer to remove the permitting language, the Senate voted 72-23 on a procedural motion setting up likely passage Thursday of the legislation to continue funding federal operations through Dec. 16.

The House is poised to follow suit on Friday, just ahead of the deadline to avert a shutdown.

The stopgap measure also includes more than $12 billion for Ukraine to assist in its war with Russia, $1 billion for emergency home heating assistance, $2 billion for previous disasters and $2.5 billion for New Mexico wildfires. In addition, the bill would extend Food and Drug Administration user fees for five years, avoiding a threatened layoff and disruption of product testing.

Not included were any new funds to fight Covid-19 or monkeypox as requested by the White House.

Opposition to Manchin’s plan to speed up approval of energy projects had threatened to stall passage of the funding bill. It was attached to the must-pass spending legislation as part of a bargain with Schumer and President Joe Biden in exchange for Manchin’s crucial vote on a climate and tax package in August.

Republicans argued that the permitting provisions were just “political payback” to Manchin for his climate vote and they did not want to facilitate that deal. Senate GOP leader Mitch McConnell said the Manchin proposal was a “poison pill” and “a phony attempt to address an important topic of permitting reform.”

Progressives also opposed it. Vermont Senator Bernie Sanders, who helped lead the fight against the Manchin bill, vowed to make sure any bill that helps fossil fuels stays dead.

“If we are talking about expediting clean energy products then sure,” he said. “The last thing this world needs right now is any more fossil fuel projects.”

But White House Press Secretary Karine Jean-Pierre said in a statement on Tuesday night that “the president supports Senator Manchin’s plan because it is necessary for our energy security, and to make more clean energy available to the American people.”

She added that “we will continue to work with him to find a vehicle to bring this bill to the floor and get it passed and to the president’s desk.”

Jean-Pierre said “we support Senator Manchin’s decision not to press for a floor vote given the misguided Republican decision to put politics over progress.”

Manchin also blamed politics for his plan getting blocked and cited the actions of Russian President Vladimir Putin’s action to “weaponize energy” in waging his war against Ukraine.

“A failed vote on something as critical as comprehensive permitting reform only serves to embolden leaders like Putin who wish to see America fail,” Manchin said in a statement. “For that reason and my firmly held belief that we should never come to the brink of a government shutdown over politics, I have asked Majority Leader Schumer to remove the permitting language” from the spending legislation.

The decision spells the end for now for an effort by Manchin to convince his colleagues to support compromise energy permit changes that he argued were key to US energy independence and transition to renewable sources.

Schumer said that he, Manchin and other senators “will continue to have conversations about the best way to ensure responsible permitting reform is passed before the end of the year.”

Senator Shelley Moore Capito, a West Virginia Republican, said she would work with Manchin to try to negotiate a new version in the coming months that can get GOP support.

“The problem is that it was a one party proposal,” she said. Capito is looking to include it in the annual defense policy bill coming to the Senate floor as soon as October. Yet any changes that please Republicans could lose Democratic votes.

Senator Rob Portman, an Ohio Republican, said he had talked with Capito and Manchin about forming a bipartisan group to get a permitting bill passed. But House approval is not assured. At least 72 Democrats have come out against the substance of Manchin’s energy permit changes.

The remaining parts of the funding bill extend agency funding through Dec. 16, past the November midterm elections. The leaders of the appropriations committees have vowed to complete work on the 12 annual spending bills in the post-election lame duck period. That’s a tall order because Congress has enacted none of the bills and if control changes hands in the midterms, there will be pressure on Republicans to postpone final bills until the new Congress is sworn in in January.