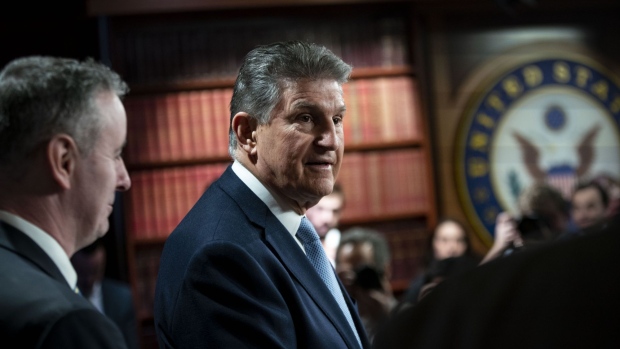 Senator Joe Manchin, a Democrat from West Virginia, speaks during a news conference about a bill to ban Russian energy imports, at the U.S. Capitol in Washington, D.C., U.S., on Thursday, March 3, 2022. The White House is asking Congress for $32.5 billion in emergency funding to boost its response to Russia's invasion of Ukraine and tackle the ongoing fight against the coronavirus. , Bloomberg

(Bloomberg) -- Senate Energy Chairman Joe Manchin called on the Biden administration to use the Defense Production Act if necessary to rush completion of a stalled pipeline through his state to help Europe replace Russian natural gas supplies.

Manchin said the 303-mile Mountain Valley Pipeline, which crosses his home state of West Virginia into Virginia, could transport two billion cubic feet a day and be up and running in four to six months.

“It’s the quickest thing that we can get, it’s more energy into the market that’s going to be needed,” Manchin said of the mostly-built pipeline. “I’ve been preaching to the heavens for a long time on this one. It can be done with the Defense Production Act.”

He said he would support “any way” to get the pipeline finalized -- he also has drafted legislation that would approve it -- but that the Defense Production Act would be justified to expedite it so the gas can be quickly converted to liquid form and shipped to Europe.

“Why not? I mean, my God, do we need the product for LNG, and LNG is going to replace basically dirty gas from Russia,” he said.

“It would basically be providing money to oil companies to do something that they already probably have the capacity to do,” she said.

The pipeline is more than 90% complete but has been challenged by environmentalists, and a federal court in January rejected its permit to cross a national forest. Even if it is completed, there is limited capacity to export American natural gas -- particularly on the U.S. East Coast, where the nearest facilities to liquefy the fuel and prepare it for overseas shipping are the Cove Point terminal in Maryland and the Southern LNG facility in Georgia. Even once fully permitted, new LNG export terminals take years to build.

Manchin, a conservative Democrat whose vote is pivotal in the 50-50 Senate, led bipartisan calls to ban Russian oil imports, which President Joe Biden ultimately ordered by executive action this week.

Manchin also has urged the administration to reverse regulations on the oil and gas industry, including restarting leasing offshore and on public lands, and to send a signal to the industry with longer-term plans for things like drilling in the Gulf of Mexico. An existing five-year for selling offshore oil and gas leases expires on June 30, and the Interior Department is not on track to immediately replace it with a new program allowing auctions through 2027.

Manchin during a hearing earlier in the day urged both the administration and the oil and gas industry to “step up to the plate, stop pointing fingers, take action, and get it done” on boosting oil and gas supplies, and urged the industry to put production ahead of profits.