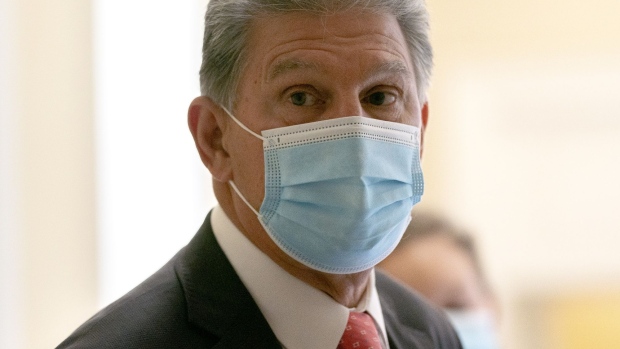 Senator Joe Manchin, a Democrat from West Virginia, arrives to Senate Democrat policy luncheons at the U.S. Capitol in Washington, D.C., U.S., on Tuesday, Sept. 14, 2021. House Democrats on Monday released a package of tax increases that falls short of President Biden's ambition, an acknowledgment of how politically precarious the White House's $3.5 trillion economic agenda is for party moderates. , Bloomberg

Asked about Democrats’ plans to expand benefits for dental, vision and hearing in the upcoming budget reconciliation bill, the West Virginia Democrat pointed to the program’s long-term financial problems instead.

“I will say this about Medicare. We need to stabilize it. By 2026, you understand, the trust fund is going to be insolvent,” he said. “That means there’s going to be an awful lot of cuts to a lot of people who depend on the Medicare they’re getting today. I want to make sure that we are stabilizing what we have before we start going down this expansion.”

Manchin’s vote on the reconciliation package, which contains the core of Biden’s domestic plans and requires just 50 votes for passage, is crucial in the evenly divided Senate where Vice President Kamala Harris casts tie-breaking votes. But Manchin and Senator Kyrsten Sinema of Arizona, another moderate Democrat, oppose the plan’s $3.5 trillion price tag.

Manchin did, however, reiterate his support for Medicare negotiating lower prices for prescription drugs -- another top Democratic priority imperiled by a small group of House Democrats during negotiations on Biden’s economic agenda.

“We definitely should let Medicare negotiate the prescription drug prices. That’s one thing that should be done for sure,” he said.

“My God, look at the VA model. Just take the VA model,” he said, referring to the prescription program for veterans.

Manchin’s views put him at odds with Sanders -- the major advocate of the Medicare expansions -- and other Democrats like Cory Booker of New Jersey, who have argued there should be no employment requirement because raising children is work.