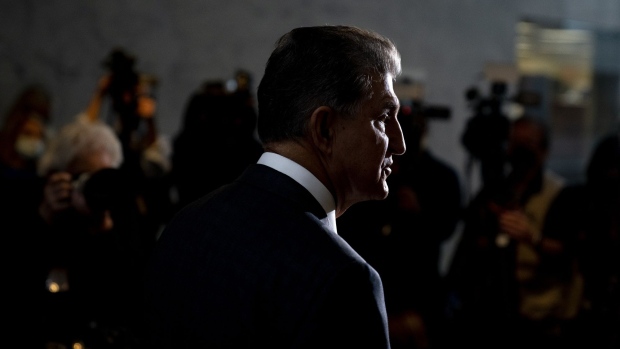 (Bloomberg) -- Senator Joe Manchin raked in hundreds of thousands of dollars from donors in the energy industry in the third quarter, including some from contributors who normally back Republicans, according to his latest filing with the Federal Election Commission.Manchin is opposed to environmental provisions, as well as the ultimate price tag, in the Democrats’ proposed $3.5 trillion spending bill that addresses a wide range of the party’s policy priorities. His home state of West Virginia is the second-biggest U.S. coal producer after Wyoming.

The White House and Democratic congressional leaders are discussing how to scale back the social-spending measure to win the votes of Manchin and another holdout Senate Democrat, Arizona’s Kyrsten Sinema.

Manchin, who doesn’t face voters until 2024, raised $1.6 million in the third quarter, with more than $400,000 coming from the oil and gas industry. He ended September with $5.4 million cash on hand.

Manchin got $74,600 from the employees and political action committee of Energy Transfer Partners, a diversified midstream energy company. Co-founder Kelcy Warren, who hosted a fund-raiser for former President Donald Trump in his Dallas home and gave $13.7 million to GOP candidates and causes in 2020, gave Manchin the maximum $5,800–$2,900 for his primary and general election campaigns.

Harold Hamm of Continental Resources, which pioneered fracking in the North Dakota Bakken shale formation, gave $3,950. Hamm is a major donor to the Republican Party and gave $500,000 to Trump’s authorized super PAC, America First Action, in 2018. Trevor Rees-Jones, the billionaire owner of Chief Oil & Gas who’s given millions to Republican super-PACs and candidates, gave $5,800 to Manchin.

John Waldron, president of Goldman Sachs Group Inc., gave her $5,800 as did Cameron and Tyler Winklevoss, the twins best known for their part in the history of Facebook Inc. She also received a $2,900 contribution from Haslam.