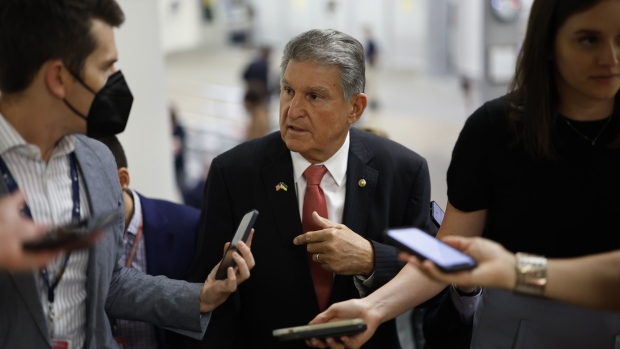 Senator Joe Manchin, a Democrat from West Virginia, speaks with members of the media at the US Capitol building in Washington, D.C., US, on Wednesday, May 11, 2022. Senators are expected to vote on a measure codify abortion access that was introduced after a leaked Supreme Court draft opinion in a case concerning a Mississippi ban on abortion after 15 weeks showed the court could overturn Roe v. Wade. , Bloomberg

The West Virginia Democrat said in a tweet that spoke with Barr last week about the nominee’s views on the future of the banking industry, the importance of energy security and “the need for strong monetary policy responses from the Federal Reserve to minimize and reverse the harmful effects that inflation taxes are having on the American people.”

“I believe he will make a good addition to the Federal Reserve Board and intend to support his nomination,” Manchin said. Some other key Democrats in the 50-50 Senate have also pledged their support, including Senate Banking Chair Sherrod Brown of Ohio and Elizabeth Warren of Massachusetts.

Biden last month nominated Barr, one of the architects of the Dodd-Frank Act of 2010, to the post after Manchin sunk Sarah Bloom Raskin’s nomination and she withdrew from consideration.

Senator Pat Toomey of Pennsylvania, the top Republican on the banking panel, has criticized Barr’s role in helping to create the Consumer Financial Protection Bureau, an agency he called “unconstitutional and unaccountable.”

Barr served at the Treasury Department during the Obama administration and worked for the National Economic Council under President Bill Clinton. He was also part of the Biden transition team.

Barr is currently dean of the Gerald R. Ford School of Public Policy at the University of Michigan. He’s been on the faculty of the university’s law school since 2001.