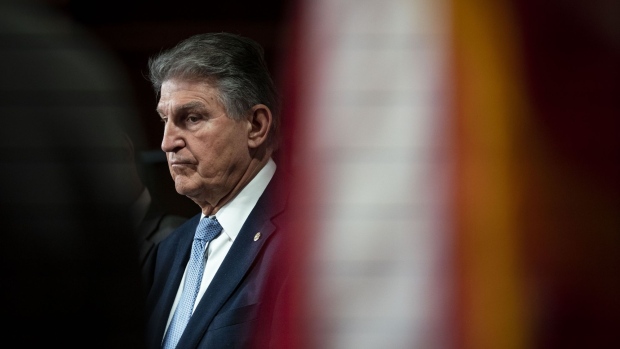 Senator Joe Manchin, a Democrat from West Virginia, listens during a news conference about a bill to ban Russian energy imports, at the U.S. Capitol in Washington, D.C., U.S., on Thursday, March 3, 2022. The White House is asking Congress for $32.5 billion in emergency funding to boost its response to Russia's invasion of Ukraine and tackle the ongoing fight against the coronavirus. , Bloomberg

(Bloomberg) -- The much-delayed Mountain Valley Pipeline may get fast-track approval under a side-deal reached between Senate Majority Leader Chuck Schumer and Senator Joe Manchin, according to a summary of the accord obtained by Bloomberg.

The deal to move forward on separate permitting reform legislation, which also has the blessing of House Speaker Nancy Pelosi and the White House, would “require the relevant agencies to take all necessary actions to permit the construction and operation of the Mountain Valley Pipeline and give the DC Circuit jurisdiction over any further litigation,” according to the summary.

Construction of the 303-mile (488-kilometer) natural gas pipeline, which crosses Manchin’s home state of West Virginia, has stalled after a federal court in January rejected a permit to cross a national forest following a challenge by environmentalists.

The pipeline would provide drillers in the gas-rich Appalachian Basin with much-needed takeaway capacity. Similar projects from Dominion Energy Inc., Duke Energy Corp. and Williams Cos. were scrapped amid fierce opposition from environmental groups.

Schumer has said the deal would move separately from the tax and climate deal with Manchin. The deal also puts a two-year time limit on environmental reviews for large projects and one year for smaller ones.

Shares of Equitrans Midstream Corp., which operates the project, surged as much as 20% in after-market trading in New York.