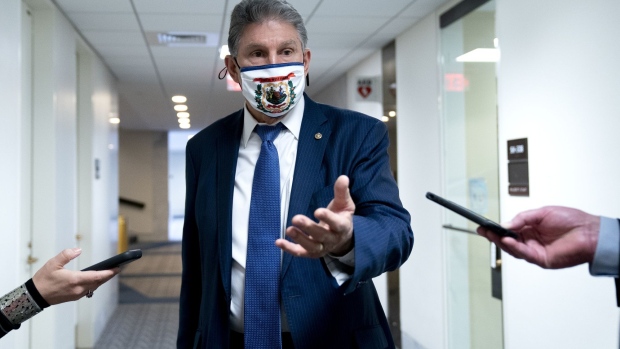 Senator Joe Manchin, a Democrat from West Virginia, speaks to members of the media while departing a bipartisan Senate luncheon in Dirksen Senate Office Building in Washington, D.C., U.S., on Wednesday, March 3, 2021. President Biden's imperative of swiftly passing his $1.9 trillion pandemic-relief program faces one of its final hurdles, settling disputes among Senate Democrats over how to ensure aid gets to those who truly need it. , Bloomberg

Writing in a Washington Post Op-Ed, Manchin described the rule that requires 60 votes for most legislation as a “critical tool” to protect the interests of less populous states like West Virginia, which he represents.

“I have said it before and will say it again to remove any shred of doubt: There is no circumstance in which I will vote to eliminate or weaken the filibuster,” Manchin wrote. “The time has come to end these political games, and to usher a new era of bipartisanship where we find common ground on the major policy debates facing our nation.”

In an evenly divided Senate, centrist Democrats like Manchin have an effective veto on any votes that don’t have Republican support. His opposition to changing the filibuster means that current Senate rules are here to stay.

Manchin also criticized the over-use of the budget reconciliation process that can fast-track certain types of legislation with just a simple majority. Democrats used reconciliation to pass their $1.9 trillion pandemic-relief bill last month without any Republican votes. In 2017, Republicans passed then-President Donald Trump’s tax overhaul through the same process.

Manchin urged a different approach for Biden’s $2.25 trillion economic stimulus proposal. White House Press Secretary Jen Psaki said Tuesday the administration is “encouraged by some of the statements that have been made about components of the package where we could find agreement.”

Republicans, however, are unlikely to go along with the tax increases Biden plans to use to pay for investments in infrastructure and social initiatives. Democratic leaders have suggested the plan could be broken up into pieces, some of which could go through reconciliation.

Manchin said that would be a mistake, and Democrats should work to find areas of common ground with Republicans.

“If the filibuster is eliminated or budget reconciliation becomes the norm, a new and dangerous precedent will be set to pass sweeping, partisan legislation that changes the direction of our nation every time there is a change in political control,” Manchin said. “The consequences will be profound — our nation may never see stable governing again.”