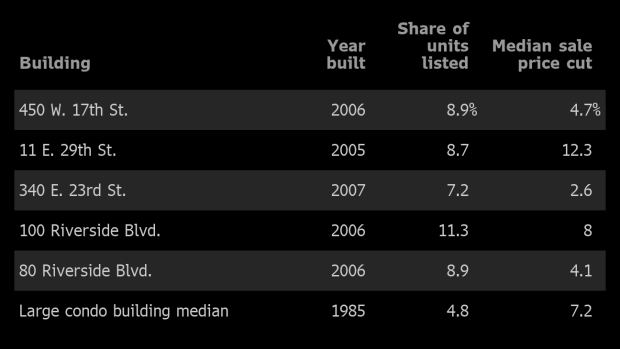 (Bloomberg) -- Manhattan condo owners who’ve enjoyed property-tax reductions are heading for the exits of their posh buildings as their breaks are set to expire.

At a sampling of five buildings where the city’s 421-a tax abatement will end this year or next, owners are listing a greater share of apartments for resale compared with other large Manhattan condo towers, according to StreetEasy. Often, they’re not finding takers until the price drops close to -- or less than -- what the seller paid years ago.

“People aren’t willing to pay the same amount for something that’s going to cost them more on a monthly basis,” said Grant Long, senior economist with the listings website. “Figuring out what the right price is, given the expiring abatements, is going to be a challenge over time.”

Manhattan’s would-be buyers are weighing potential purchases cautiously these days, refusing to overpay for homes and causing years of rapid price increases to come to a halt. They’re also tax-sensitive, thanks to new rules that limit how much of their property levies can get written off on federal returns.

Thousands of Manhattan condos built before the 2008 downturn benefited from the now-defunct 421-a, in which developers received property-tax breaks and passed them along to buyers as a way to promote sales in their pricey buildings. Under the program, an apartment’s property-tax burden would be phased in over 10 or 15 years, with the first few years fully exempt. The abatement’s expiration means the unit is subject to the full tax bill.

Buyers -- owners who live in the units and investors who rent them out -- paid top dollar for condos with low carrying costs, probably reasoning they’d recoup their investments by selling at a big profit before their abatements ended, Long said. That strategy won’t work in today’s saturated market.

“The difference between a building with a tax abatement and a building without is probably an additional $400,000 on the purchase price,” said Alon Chadad, broker and co-founder of Blu Real Estate, which is marketing listings at Upper West Side properties with expiring abatements.

At the Avery, a tower at 100 Riverside Blvd. where the breaks will end this year, about 11% of the building’s 266 units were offered for sale at some point between last May and mid-May of this year, according to StreetEasy. By comparison, condo properties across Manhattan with 50 or more units had a median of 4.8% of their units listed in the same time period.

Next door at the Rushmore, where abatements expire in 2020, 8.9% of the units were listed for sale within the past year. That’s about the same share as at the Caledonia in Chelsea, where the breaks also expire in 2020, and Sky House, at 11 E. 29th St., where they end this year.

“It’s one of those buildings where anybody who bought in ’08 or ’09 would be lucky to break even,” Chadad said. “That’s what we’ve been seeing these last few months.”

To contact the editors responsible for this story: Debarati Roy at droy5@bloomberg.net, Christine Maurus, Daniel Taub