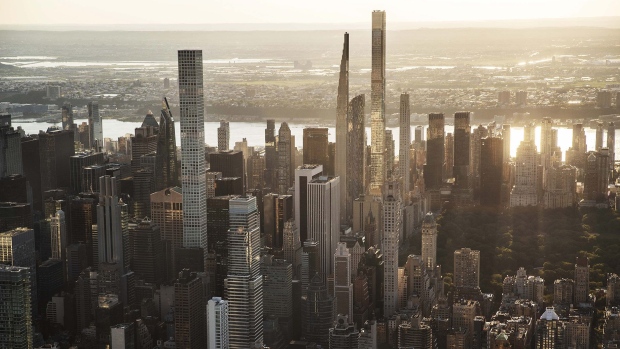 The dollar volume of high-end deals reached $483.6 million last week, the highest total for a seven-day period since December 2013, according to a report by Olshan Realty Inc., which measures signed contracts at $4 million and above. Sixteen of the 50 homes that found buyers were listed for at least $10 million, the biggest tally of so-called “trophy properties” since March 2013.

Domestic buyers seeking to upgrade their urban homesteads are flocking to Manhattan’s priciest condo offerings. They’re drawn to suites of amenities including gyms and movie-screening rooms, and a less-intrusive closing process than at co-ops.

The priciest unit to go into contract last week was a resale condo at 443 Greenwich St., an 8,908-square foot (828-square-meter) penthouse with six bedrooms and a private elevator that was seeking $49.5 million, according to Olshan’s report. Following was a 66th-floor, three-bedroom condo at Extell Development’s under-construction Central Park Tower that was listed at $26.1 million. The final sale prices won’t be known until the deals close.

Just as the 2013 market signaled the recovery from the 2008 financial crisis, this year’s high-end deal surge suggests buyers are officially emerging from a pandemic mindset, said Donna Olshan, president of the brokerage. The expected lifting of overseas travel restrictions next month might even juice the market further, she said.

“I suspect we’re going to have some other big weeks” as foreign buyers return, Olshan said.