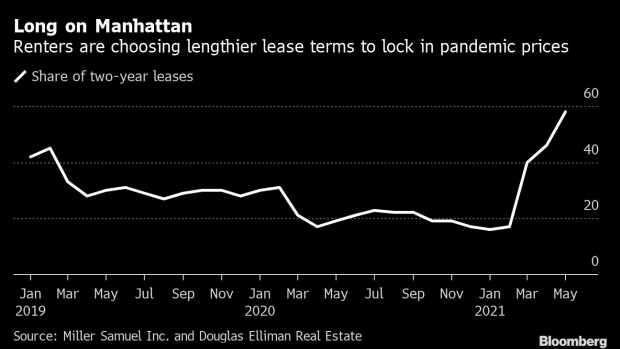 A person stands on a pier in front of a view of the Empire State building along the waterfront in Jersey City, New Jersey, U.S., on Monday, April 5, 2021. U.S. futures edged higher while most Asian stocks climbed as investors digested Friday’s unexpectedly strong jobs report. , Bloomberg

(Bloomberg) -- Renters are piling into Manhattan, and they’re planning to stay for a while.

In May, the number of new leases jumped more than fourfold from a year earlier to 9,491, according to a report on Thursday by appraiser Miller Samuel Inc. and brokerage Douglas Elliman Real Estate. That’s the most new signings for any month in data going back to 2008.

Nearly 60% of those who committed to a lease last month in Manhattan opted for a two-year agreement, a sign that consumers are making longer term plans to remain in the city -- and are locking in today’s rent concessions and landlord giveaways while they can. The share of two-year leases signed in May was the largest in data going back to January 2019.

With Covid cases dropping and employers discussing returns to the office, New Yorkers who’ve been living at a distance are taking advantage of a still-weak rental market to plot their return.

Manhattan landlords, eager to fill empty units, offered concessions, such as free months rent, on 41% of all deals signed last month, the firms said. Even with those factored in, rents plunged 11% from last May to a median of $3,037.

The same held true for Brooklyn, where monthly lease signings also set a record in May. New contracts jumped more than three-fold from last year to 2,506, the firms said. Median rent in the borough fell 9.5% to $2,644.

In Northwest Queens -- including the commuting neighborhoods of Long Island City and Astoria -- there were 510 new leases signed last month, compared to 149 the same period a year ago.

“It’s preparation for a return to school, return to work, escape from your parents’ homes,” Miller said. “We’re undergoing a return back to normal life and this is part of it.”