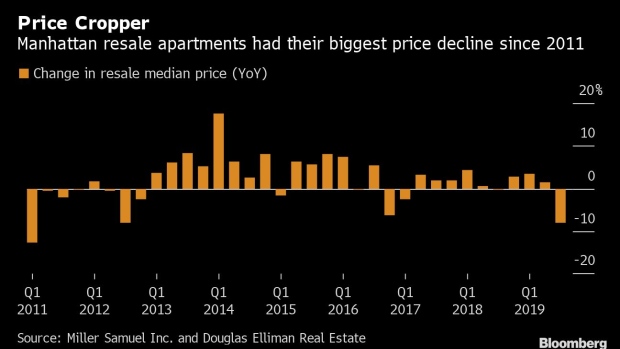 (Bloomberg) -- Resale prices for Manhattan apartments tumbled the most in more than eight years, pushed down by buyer demands for discounts in a market swamped with choices.

Previously owned condos and co-ops sold for a median of $915,000 in the third quarter, down 8% from a year earlier, appraiser Miller Samuel Inc. and brokerage Douglas Elliman Real Estate reported. It was the first decline in the past 10 quarters and the biggest since the first quarter of 2011.

“It’s just more signs that the sellers are capitulating,” Jonathan Miller, president of Miller Samuel, said in an interview. “The market is going through what could be called a reset.”

Declining sales over the past two years have sobered Manhattan’s home-sellers, who now realize that the way to a deal is a markdown. In the three months through September, 93.6% of all purchases were at or below the last asking price, the second-highest share since the end of 2011, Miller said. Many homes that sold at the asking price had gotten previous reductions.

In its own report, the brokerage Core said homes that sold in the third quarter spent an average of 192 days on the market. There’s a mismatch between what buyers want and what sellers are offering, Core’s data suggest. Twenty-nine percent of Manhattan’s inventory is priced over $3 million -- yet in the quarter, only 9.7% of closings were in that range.

Prospects won’t improve as long as there are so many listings to choose from, Miller said. The number of apartments for sale rose for an eighth consecutive quarter, to 7,352 on the market at the end of September, or 6.2% more than a year earlier, according to Miller Samuel and Douglas Elliman.

The slide in prices and sales will probably continue, Miller said, “because things are confusing: The economy is confusing, Washington is confusing. There’s no way we’re out of the woods yet.”

To contact the editors responsible for this story: Rob Urban at robprag@bloomberg.net, Christine Maurus, Pierre Paulden